Brian Holmes and Sheila Stokes had the pleasure of spending years with the Dingle dolphin, who became known as Fungie.

IT IS DIFFICULT to pin-point when the expectation that the dolphin discovered swimming around in the Dingle harbour entrance channel would always be found there, rather than the stay being an ephemeral event as most of these aquatic serendipities turn out to be.

However, that anticipation did grow such that his recent absence came as an unpleasant shock to locals, tourists and dolphin enthusiast.

It is a sad irony that the disappearance occurred only a few short months since the Guinness Book of Records portentously reported him the longest, established, solo resident dolphin throughout history. 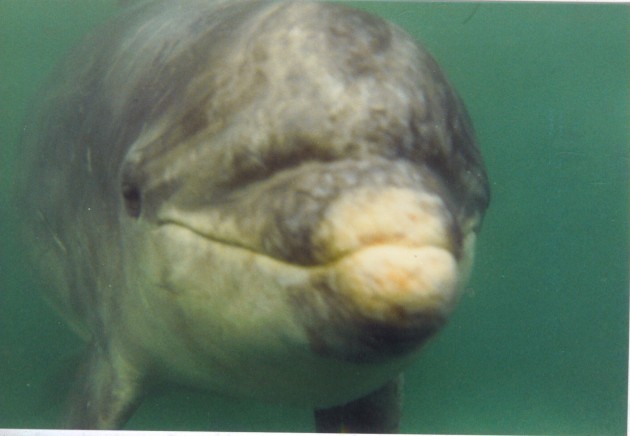 It was also an unpleasant coincidence that the poet, Heathcote Williams, who helped spread the fame of this resident dolphin globally with his book, Falling for a Dolphin, also left us. But then it was 2020, a year that seemed determined to offer no respite from unpleasant events.

My own association with the channel resident began in 1986 when Sheila Stokes and I first came upon the lone, male, bottlenose dolphin of Dingle harbour, but we had no comprehension of how long and enjoyable an adventure, for ourselves and later many other people, that good fortune would present. 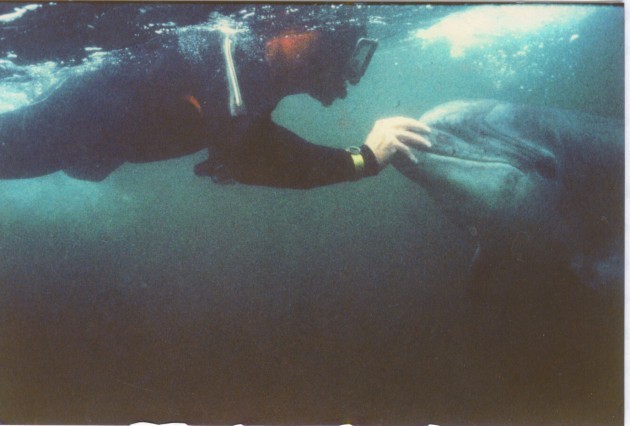 Since arriving in Ireland some four years earlier we had already sailed among the resident group of dolphins in the Shannon Estuary and then swum with a pod in a Connemara bay.

These experiences had linked us to the playful marine mammals but also shown us just what adventures the west coast might have to offer. So, at every opportunity, we quizzed the locals to see what aquatic activity might be common to them but unknown in general.

And then we arrived in Dingle. It would be a different setup now since the Irish Whale and Dolphin Group (IWDG) has an enthusiast on every headland reporting cetacean activity and Bord Fáilte has promoted the Wild Atlantic Way into second place of Ireland’s tourist attractions behind the Guinness Storehouse. However, back in the early ’80s, the west coast was a remote location awaiting anyone with a spirit of adventure.

Those two previous, uncommon inter-species opportunities were to prove insignificant in comparison to the experiences presented in the murky entrance channel to that small, west coast, fishing harbour. 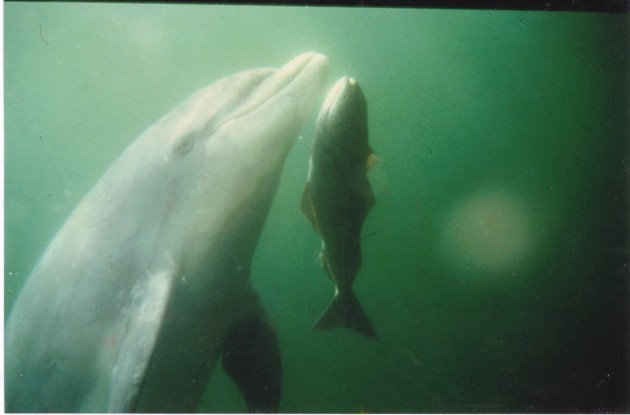 But, of comparable importance to us was the meeting with Paddy Ferriter, and his dog Bok, the equally lone keeper who watched over the fishing fleet from his lighthouse home on the northern shore of the channel.

Not a young man at the time he still had a twinkle in his eye and it was obvious Sheila was his favourite and I could chop the wood and walk the dog.

As time would show the dolphin was of the same frame of mind. We would often lodge with Paddy on our trips and listen to his tales of a life spent on the sea and the changing face of Ireland into the early hours. 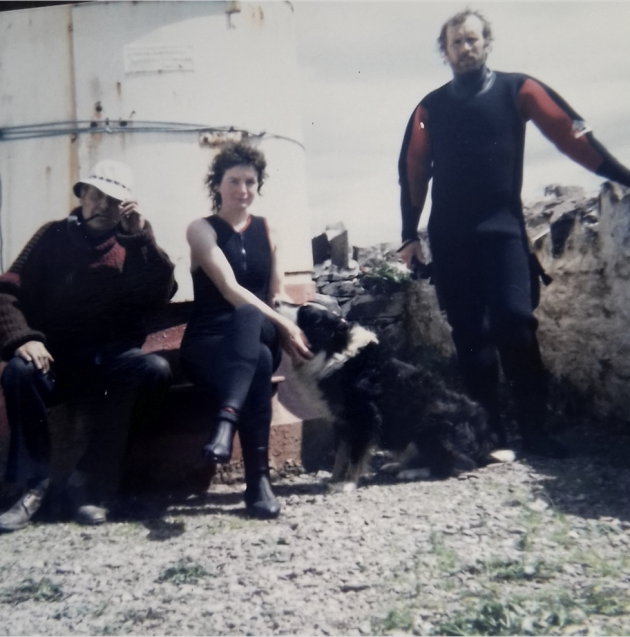 Paddy did not believe that early to bed would make him wise and favoured sitting by his ancient range ‘thinking’ and smoking his treasured pipe. On one summers day, he was visited by a schoolboy friend who had emigrated to America many years earlier. They had no contact over that time, so I was intrigued to listen to them for over an hour discussing pipe tobacco, after which time they parted with no other topic required!

In a small community like Dingle, it soon became general knowledge that two people had started regularly swimming with the fishing fleet’s self-appointed pilot and this, in turn, resulted in a meeting with Tommy Flannery, a local fisherman.

Tommy was able to provide the prologue to the dolphin’s tale and how it had taken up residency some three years early and would often escort the passing boats between two specific waypoints.

The dolphin did not seem to receive any material reward for this activity so, like the reason for his selection to make Dingle his home port, only anthropomorphic speculation could offer a reason for this chosen way of life.

There was caution from both sides when we first took to the water and presented ourselves to this wild, very large, marine mammal, but not for long as it became obvious this dolphin was as keen to meet humans and we were him.

Casual underwater approaches were soon replaced by dolphin instigated energetic, sometimes rough, games or quiet, intimate contacts where he would lie still to be stroked and rubbed until your arm ached. 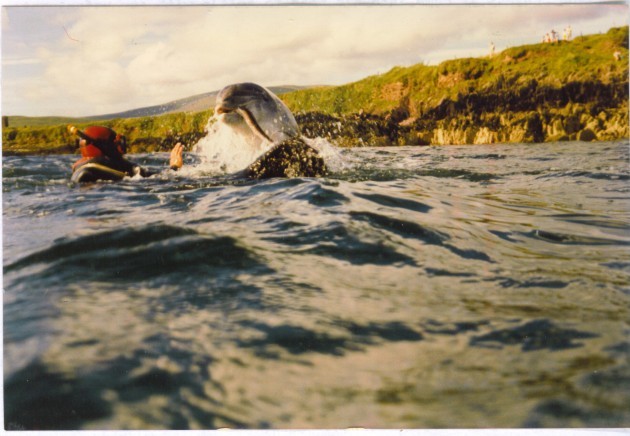 It was late Autumn when we had first taken the plunge, so the town was no longer busy with tourist traffic. Being a reasonably sheltered stretch of water we had decided we would continue to visit all winter to see how far the relationship could develop.

That time of year had the added advantage that those early swims were exclusive with only the passing fishing fleet distracting the dolphin from his human investigations. New wetsuits allowed us to stay in the cold water for several hours and we knew Paddy would always have a warming cup of tea brewing on the range.

As such the relationship developed very quickly and offered tremendous photographic opportunities to record the events, except when our fingers were so numb, we could not press the camera shutter.

There is not space in this article to describe all the varied games we were treated to (or used in!), ranging from leaping over our heads, playing tag with fish he had caught (except a large salmon he presented but then promptly swallowed.

Some catches, it seems, are too tasty to play with), sneaking up behind us and hitting our heads with his beak and slapping his tail from port to starboard over our heads. 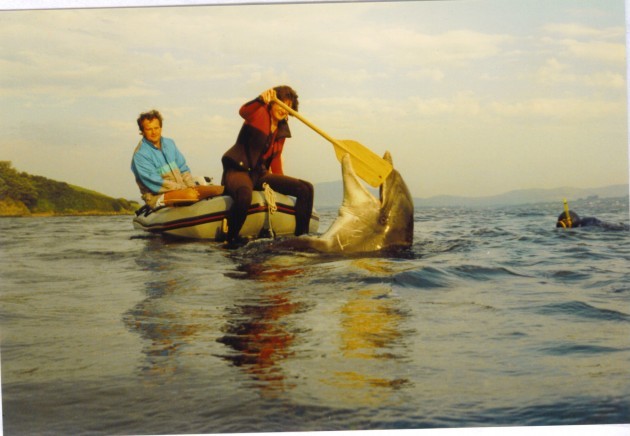 He would take Sheila (not me) for dorsal fin rides, messing with buoyant seaweed or planks, balancing the boat paddle on his beak, or chewing it, lifting the bow of the boat as we punted along and the most disturbing when, in really murky water, he would pass directly below one of use at speed so his wake would suck you unexpectedly underwater.

There were many others, but the intriguing fact was that all activities were instigated by the dolphin. On one occasion when messing with a fish Sheila stretched out an arm and the dolphin dropped the fish in her hand and backed off, with an expression of ‘well you wanted it, so now eat it’.

Not being a sushi fan Sheila came to the boat with her gift to consider the matter. So, I distracted a watchful dolphin whilst Sheila swam off to let a very lucky Pollock go behind a rock. It had great difficulty swimming in a straight line. But where did the dolphin conjure up all these activities, a new one on every visit?

After that first winter, the dolphin’s presence had become better know and a few enthusiasts began to appear. Also, a couple of retired fishermen started running boat trips out to see the dolphin, including Tommy on the Petra.

Back then everyone tended to know each other and the boatmen enjoyed showing the passengers the dolphin – human interactions as much as him performing with the boat. In truth, though, there was always a pecking order of interest with fast inflatables being top of the order and slower tour boats second. 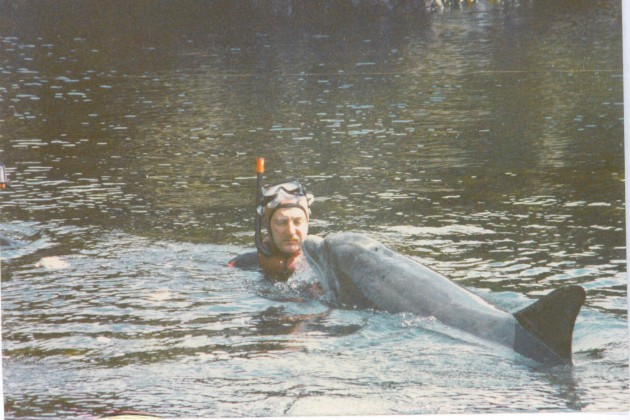 Slow, clumsy limited ability swimmers were at the bottom of the list so it was always a special occasion when the dolphin chose to stay with a swimmer over the speed boats. There was no IWDG at this time but future co-founder, Simon Berrow, decided to see what the fuss was about.

Because of its remoteness, there were still a couple of years of relatively peaceful sessions with the dolphin, especially early and late in the day. One of these provided a spectacular occasion when the water was full of bio-luminous plankton, so sparks flew off the dolphin’s tail and lit his wake.

In all we remained regular visitors for seven years, travelling over most weekends and holidays, and intermittent visitors after that, Sheila more often than myself, even up to his disappearance. If the water was busy there was always Paddy to chat with. 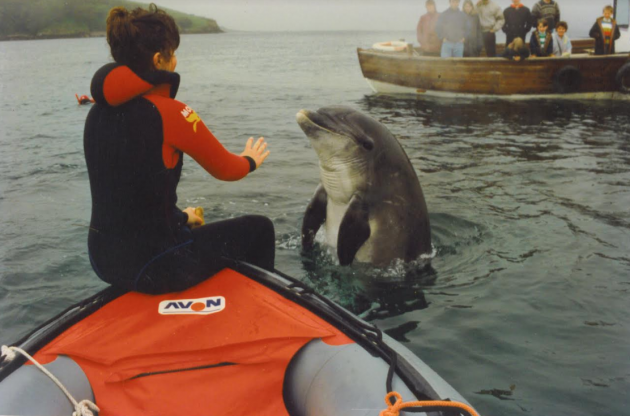 We also had the privilege of working with a couple of film crews and cetologists over the time, such as Wade Doak and Roger Payne and did some casual study work for Dr Margaret Klinowska, reporting a new fish supper and collecting some skin parasites that appeared on the dolphin one summer. And, of course, Heathcote in the production of his book.

Sadly, it appears the Dingle adventure may have finally come to an end as the popular aquatic attraction has not been seen for some time. There is a feeling the dolphin may have died since he must have been approaching the expected life span of a male dolphin.

But sure, hadn’t he had a peaceful, quiet life so should have reached a ripe old age.

Besides, if age or sickness was the culprit for his absence wouldn’t one of the new generations of acolytes have noticed changes in body mass or skin disorders or differences in interactive sessions. If he is taken by the wanderlust then behavioural variations could have presented themselves, but these may not have been so easy to observe. 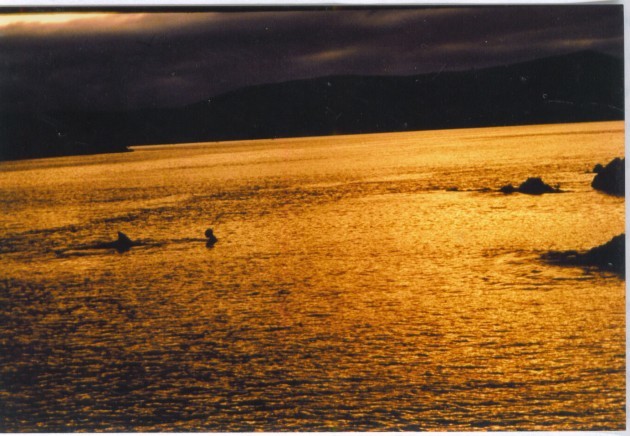 The enthusiastic local boatmen reported last year that he had been quieter for a while and could not be guaranteed to perform his water gymnastics all the time.

However, I prefer to think he may have finally encountered a pod of his own species who tempted him not to be the hermit dolphin so many people have had the pleasure to be entertained by.

His best identifying mark is a nick in his tail fluke so if you’re ever at sea, watch out for a friendlier than normal dolphin with this feature showing up at some other location,  entertaining new locals. You never know.

Brian Holmes is an Ocean Energy engineer who conducted research for the Hydraulics & Maritime Centre at University College Cork before becoming a consultant in the wave and tidal energy sector. He was a founder assistant on the Shannon Dolphin & Wildlife Foundation animal residency study. Sheila Stokes, although a shore-based solicitor who ran her own business, has an enthusiastic aquatic persona and is a qualified scuba diver. Reprinted with thanks to the Irish Whale & Dolphin Group (IWDG) Flukes magazine. The IWDG mission is to promote a better understanding of cetaceans and their habitat through education and research. New members welcome.