Ahead of International Women’s Day, Kathy Scott of the Trailblazery walks the road with Irish women and celebrates their spirit.

AS WE APPROACH International Women’s Day in the midst of a global pandemic I find myself reflecting on what it means to embark on a heroine’s journey.

Joseph Campbell popularised the archetypal Hero’s Journey – a form of narrative structure where the hero goes out into the world, conquers and comes back to claim his victory.

Maureen Murdoch then charted the Heroine’s Journey. The woman’s mythic quest is a process of inner transformation. According to depth psychologist Anne Davin:

Heavy is the past

Growing up female in Ireland is a complex experience. Although women rose up to fight for our Freedom in 1916 it was followed by a mighty fall – a descent that still permeates our culture today. The heroine’s journey was written out of history.

Like a chapter of The Handmaids Tale, the woman’s place in Ireland was in the home or sometimes out dancing at crossroads.

My own experience of growing up in 80’s Ireland is made up of fragmented memories that seem surreal now. As a young girl from Tipperary, I lost sleep pondering the whereabouts of Shergar and wondering who shot JR.

After school I ran home to tune into the Oprah Winfrey Show – a welcome respite from continual news reports about fallen women, moving statues and dead babies. The daily Angelus was peppered with the mantra like repetition of names like Ann Lovett, Joanne Hayes, and Eileen Flynn.

The problem with being born female into this particular cultural timeline in Ireland was that you never knew where you really belonged in the order of things. Girls were tamed and shamed from their deepest, most intuitive, wild nature.

Change, at a glacial pace

There were very few examples of the empowered sovereign feminine. She was elusive, mysterious, dangerous and a ‘bad example’.

She was nowhere to be found at home or in school until Madonna exploded onto the scene with Like a Virgin. This was a turning point for millions of young girls around the world and especially this little girl in rural Ireland where feminism was a dirty word.

1990 marked a breakthrough in this dark epoch when Mary Robinson, was elected the President of Ireland and credited Mná na hÉireann. 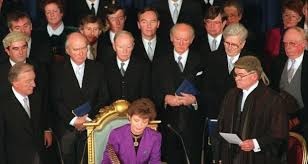 I vividly remember watching her acceptance speech with my mother. She was wearing a striking purple coat designed by Irish designer Louise Kennedy in a sea of grey men in grey suits.

I was elected above all by the women of Ireland, Mná na hÉireann, who instead of rocking the cradle rocked the system, and who came out massively to make their mark on the ballot paper and on a new Ireland.

Robinson blazed a trail and paved the way for generations to come in terms of women’s rights and gender equality. Although the waves of feminism moved at a glacial speed the tides were starting to turn.

A reluctant feminist myself, it took almost 25 more years for my next significant moment of reckoning. A series of cataclysmic events happened in 2015 that revealed the tip of the iceberg in Ireland and around the world. The frozen waters began to slowly melt, flow and gain velocity, one story at a time.

As the Irish State set out to commemorate the 1916 Rising, they omitted the extensive role that women played in securing Irish freedom. A public meeting was called at the Abbey Theatre to address the grave omissions. That meeting turned into a movement called Waking the Feminists and marked a huge turning point in my life.

This pivotal moment created a surge of positive energy and active calls for change that went on to influence and mobilise women and men in Ireland and beyond.

Meanwhile, the cascade of stories continued at The Women’s March in Washington and multiplied as thousands of women came forward to share accounts of sexual violence and harassment in various industries with the #MeToo movement.

In Ireland, more stories were shared on the road to repealing the Eighth Amendment and on 25 May 2018 the country voted to remove the amendment, with over two million votes cast by women and men in Ireland. For every significant step forward there is a circling back to pick up the pieces that were left behind.

The year-long training programme is a heroine’s journey that generates practical outcomes to empower women to gain clarity on their vision for the future, take skilful action and create expansive wellbeing, confidence and success in all areas of their lives.

My heroine’s journey was a long road home. As International Women’s Day shows on the horizon, there are many challenges but also a lot to be grateful for as Irish women. I hope that the work we do together as a community of women in this country will support our collective ability to midwife a bright future for generations to come.

Kathy Scott is Creative Director of The Trailblazery. Doors open for the Moon Medicine Academy 2021/22 programme on 22 March. Join the waitlist here.