Our schools may be Catholic, but young Irish families, increasingly, are not, writes David Graham of Education Equality.

AS ANNUAL COMMUNION preparation comes to the fore once again in schools around the country, how would you feel about the prospect of your children spending at least half an hour of every school day being treated differently from their peers and being moved to the back of the classroom, or left to sit idle at the back of a church?

Imagine this, and you will feel the sting of discrimination faced by a growing number of families within the Irish education system.

Our schools may be Catholic, but young Irish families, increasingly, are not. Structurally, Ireland’s education system has remained largely unchanged for almost two hundred years.

Over 95% of our national schools remain under denominational control, despite being publicly funded, with around 90% under the control of the Catholic Church.

The school patronage system means that the State pays the bills but cedes control to religious bodies.

Consistent with many other developed nations, Irish society is changing rapidly with respect to religious belief and practice.

This is demonstrated by the 2016 Census from the Central Statistics Office (CSO), and also by the CSO’s annual marriage statistics, which are reproduced here.

We have averaged out the last ten years to project these figures forward to 2030, with striking results.

It is important to note that this is just a projection, not a prediction. Nevertheless, the overall trend is clear. Non-religious marriages are likely to significantly outnumber Catholic marriages by 2030. 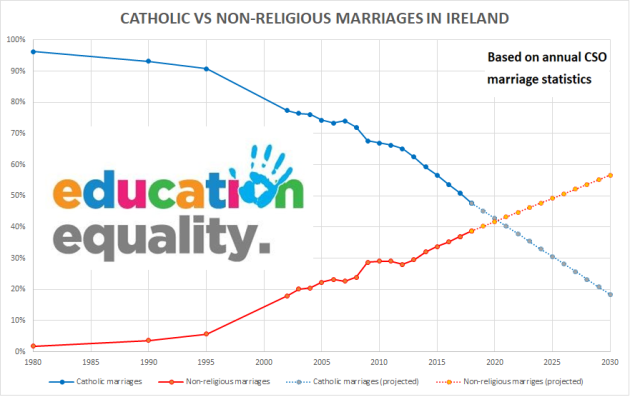 2030 is significant here as it is the year by which the government hopes to have 400 non-religious-run primary schools in place or 12% of Ireland’s total of 3,241 national schools.

This is merely a notional target. Only a handful of new schools are opened each year, and the much-vaunted ‘divestment’ process is a non-event, generating much heat but little action.

At current rates, we will have barely 200 multi-denominational schools by 2030 – contrast this with the 2,776 schools that are run by the Catholic Church.

What the marriage figures demonstrate, however, is that even the government’s optimistic target of 400 schools is inadequate.

In any event, do we really want to segregate our children into different schools on the basis of religion? Religious evangelisation in our classrooms is effectively unavoidable, representing an aberration from the human rights norms that prevail elsewhere in Irish society.

What does the law say?

The Equal Status Act 2000 forbids discrimination in employment and the provision of goods and services under nine grounds, including religion.

The Civil Registration Act 2004 allows marriages to be solemnised at a wide range of approved venues, meaning that couples can now marry in accordance with their conscience in ways that were not possible in the past.

The Education (Admission to Schools) Act 2018 removes religion-based admissions criteria from the vast majority of schools, meaning that parents now enjoy freedom of conscience when deciding whether to baptise their children.

There is a strong legal basis, both under Article 44.2.4 of the Constitution – which expressly provides for “the right of any child to attend a school receiving public money without attending religious instruction at that school” – and under human rights law, for respecting parents’ freedom of conscience with regard to the evangelisation of their children at school.

Numerous international human rights treaty bodies, including the UN Committee on the Rights of the Child, have pointed to Ireland’s failings in this regard.

Current practices in schools render the right to opt-out of unwanted religious indoctrination ineffective, not least because of the integrated religious curriculum, which is imposed on all children. 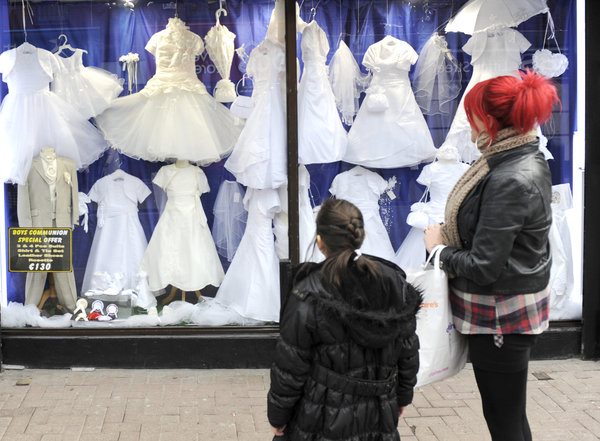 During formal religious instruction periods (usually 30 minutes a day), ‘opted-out’ children are typically moved to the back of the classroom and visibly segregated from their peers while absorbing the instruction regardless.

Existing opt-out practices are wholly unsatisfactory and discourage parents from exercising their human and constitutional rights, due to the stigmatising effect it could have on their children.

Given the long-standing architecture of the Irish education system, to attempt to dispense with denominational patronage altogether would be an extremely slow, costly and legally complex undertaking.

A more pragmatic approach is required. In order to vindicate the rights of all parents and end classroom segregation, the simplest solution is to move religious instruction, including sacramental preparation, to the end of the school day under an ‘opt-in’ system.

Some existing multi-denominational schools already offer optional religious instruction after hours, so it has been proven to work. Religious practice is a choice, not an obligation.

There is an onus on the government to recognise the changes in Irish society and take meaningful action to provide equality of esteem for non-religious families and religious minorities.

Education Equality has launched a petition to provide equal respect for all children at school and make religious faith formation an optional subject, held after core school hours.

The ‘hands-off’ approach taken by successive governments to this issue has been an abject failure.

However, we are lucky enough to live in a democracy, where all power ultimately rests with the people.

The people are changing – our schools must too.

David Graham is a father of two and Communications Officer with Education Equality.