Belarusian opposition figure Maria Kolesnikova has filed a criminal case with the Investigative Committee, after the country’s security forces reportedly threatened to deport her “alive or in parts.” 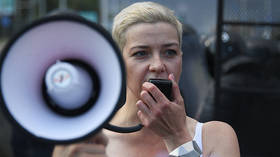 On Wednesday, Kolesnikova’s lawyer Lyudmila Kazak confirmed she had been jailed in a pre-trial detention center after being accused of making public calls to seize power. Earlier in the week, it had been reported she had been kidnapped by unknown men on the streets of Minsk.

Kolesnikova was thrust into the limelight in July, when she became part of the trio of Belarusian women leading the country’s opposition. She was originally a campaign manager for former presidential candidate Viktor Babariko.

In a statement posted on Babariko’s website, Kolesnikova claimed that she underwent abduction, death threats, and an attempt to forcibly remove her from the country. Because of these alleged crimes, she has filed an application to Belarus’ Investigative Committee to begin proceedings against State Security Committee (KGB) officers, who she says she would be able to identify.

“I was told that if I did not voluntarily leave the territory of the Republic of Belarus, I would be taken out: alive or in parts,” she wrote.

According to Kolesnikova, she was threatened with up to 25 years in prison if she refused to leave the country. When the KGB saw she would not go, officers put a bag over her head and she was driven to the border with Ukraine.

“After I tore up my passport, which meant I wouldn’t be able to enter Ukraine, I was again put in a minibus and taken to the Mozyr border guard jail,” she said.

Along with Svetlana Tikhanovskaya and Veronika Tsepkalo, Kolesnikova became well-known after spearheading the opposition campaign in August’s Belarusian presidential election. After the election results were published, and incumbent leader Alexander Lukashenko won with 80 percent, thousands of Belarusian citizens took to the streets to demand change and a new vote. On August 14, former candidate Tikhanovskaya formed the Belarus Coordination Council, a group aimed at annulling the election results. The group, which has Kolesnikova as part of its seven-person presidium, has been accused by the Belarusian authorities of “aiming to seize state power” and “harming national security.”