Students in Westchester received a cartoon likening police to the KKK as part of an assignment that appeared to demand support for Black Lives Matter. Parents outraged by the image alone are failing to recognize a deeper problem. 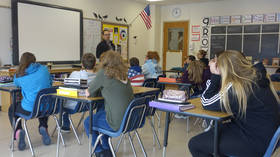 The incensed mother of one student at Westlake High School went straight to the media with the assignment – which, in addition to the offending cartoon, included a laudatory excerpt about the origins of BLM and a paragraph about racism in the justice system.

Quoted in the New York Post on Sunday, she slammed the cartoon as “disturbing” and “an attack on the police.” But despite complaining that the teacher was “brainwashing her kids,” her rage seemed to stop at the anti-cop image.

What should have had Ania Paternostro foaming with fury, but has become such a part of the American schooling experience that parents hardly notice it anymore, was the assignment itself. In addition to being asked to describe the ‘historical context’ of the cartoons and text snippets and how they fit into a historical framework of ‘cause and effect’ or ‘turning point,’ her daughter Nicole and her classmates were asked to explain BLM’s goals, and say whether they supported the movement.

Disconnected from the cartoon and the texts chosen by teacher Chris Moreno, the questions might have seemed innocuous enough – a jumping-off point for what could, in an open-minded classroom, be a fascinating discussion.

But coming after images and readings that in no uncertain terms presented the police as the modern-day heirs of slavers, plantation overseers, the KKK, and the enforcers of the Jim Crow South, not to mention a very sympathetic (and, some might say, wildly inaccurate) summary of BLM’s origins, it was clear which ‘side’ students were expected to be on.

In case there was any confusion about the ‘right’ answer, it was likely resolved for young Nicole after her complaints about the cartoon – which she called “disgusting” for comparing police to “all the terrible people in history” – were published by the Post. She told the outlet she’d been excoriated as a “racist” on social media after uttering all of two sentences in defense of cops. One can only imagine what kind of treatment she’ll get from the teacher, or her fellow classmates, for the rest of the semester.

Perhaps Nicole’s mother didn’t look past the anti-cop cartoon. It’s hard to imagine how a complaint about “brainwashing” could overlook that implied demand that students swear fealty to BLM on penalty of a lowered grade, social ostracism, or worse. Presenting the desired ideology as the ‘correct’ answer to a supposedly factual question is textbook thought reform.

Paternostro’s misplaced outrage hits at the core of the problems with American schooling, which teaches kids to regurgitate facts by rote and eventually how to have the ‘right’ political opinions, but does not teach them critical thinking, analytical reasoning or any other tactic for making use of those facts. The result is an obedient, unquestioning populace that excels at following orders and being offended – but not much else.

A docile, insecure population is crucial to a functioning police state. Ironically, before the BLM era, kids were consistently reminded that ‘the policeman is your friend.’ While ‘copaganda’ has only recently come to the attention of the public, where it is erroneously seen as a threat to adults, American kids grow up surrounded by smiling cartoon officers helping old ladies cross the street and rescuing kittens from trees.

These depictions certainly don’t harmonize with the hyper-militarized police who’ve become ubiquitous across the US since the 9/11 terror attacks, and no doubt rankle inner-city kids who see ‘Officer Friendly’ throwing their older brother up against the wall and frisking him or dragging their father away in handcuffs. But Paternostro and other parents taking issue with the ‘cops are violent racists’ propaganda didn’t complain.

It’s highly doubtful those taking offense at the cartoon would even recognize pro-cop brainwashing as propaganda – even though over the years it has become such a cliché that a book published in 2002 mocked the trope with its title, The policeman is your friend, and other lies. Just because one agrees with propaganda does not make it any less manipulative, and in a society where the police functioned as the people desire, ‘copaganda’ would be unnecessary – civilians would trust the police.

Individual officers can’t be blamed for the racial disparities in the justice system, any more than individual teachers can be blamed for the dumbing down of American kids. But just as cops are gradually waking up to the abuses of the police state they’ve helped enforce now that its leaders are turning on them, teachers would be wise to stop catering to the oligarchs who make US education policy.

With entire school systems now being handed out to the architects of the infamous Common Core, which reduced teachers to glorified standardized-test administrators and did more in a few short years to lower the US’ standing on international academic rankings than any other educational program, there’s never been a better time for them to rebel against the status quo and teach their charges how to think critically and question authority.

But bullying students into marching in ideological lockstep with BLM is not teaching them to ‘question authority’ – it’s dressing up totalitarianism as social justice. And it’s only possible because the parents of those students, incapable of critical thinking, don’t know how to cry foul on this sham.

Then again, if school is indeed meant to serve as preparation for the ‘real world,’ Nicole Paternostro has certainly gotten a crash course in what’s in store for her when she graduates. Perhaps Chris Moreno should be awarded Teacher of the Year.

Share. Twitter Facebook Google+ Pinterest LinkedIn Tumblr Email
Previous ArticleMary Lou McDonald: Confusion, mixed messaging and punch-down policies – this government is out of touch with reality
Next Article Democrat Joe Biden Leading In Battleground States. This Is How He Still Can Lose