The head of the Russian orthodox church has ordered a prominent prioress to part with her black Mercedes-Benz reminding clerics that they should refrain from driving luxurious cars and spend donations on charity. 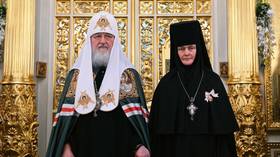 Patriarch Kirill has “blessed” Mother Superior Feofaniya, the head of the Pokrovsky Monastery in Moscow to sell off the S-Klasse Mercedes vehicle that she owns, Vladimir Legoyda, the Church’s spokesman, wrote on Telegram.

The money, which is donated to the monastery, must be only used for social and charitable activities, Patriarch Kirill clarified, according to the spokesman.

Legoyda reminded that the Patriarch had many times called upon the clergy to stay away “from cars that are considered luxurious.” A few years ago, he pointed out that such vehicles had been used by ill-wishers to discredit the Church.

Feofaniya made headlines earlier this month after the media found out that she was driving a black Mercedes, which was allegedly priced at almost 9,5 million rubles (around $135,000).

The abbess has been in charge of the Pokrovsky Monastery for more than two decades. She also reportedly heads an Orthodox gymnasium and two hotels for pilgrims, belonging to the Church.

Two years ago, President Vladimir Putin awarded Feofaniya with an Order For Merit to the Fatherland at the Kremlin.