The Irish professor of biochemistry has written a new book aimed at children, which is nominated for an An Post Irish Book Award.

PROFESSOR LUKE O’NEILL is one of Ireland’s best known scientists.

In his role as professor at the School of Biochemistry at Trinity College Dublin, he’s charged with educating university students – but with his two books, he gets to teach adults and children more about the world of science.

His latest book, The Great Irish Science Book, illustrated by Linda Fährlin and published by Gill Books, is the follow-up to Humanology: A Scientist’s Guide to our Amazing Existence, and is aimed at children. And like its predecessor, it has the honour of being nominated for an An Post Irish Book Award in the Best Irish Published Book category, which is sponsored by TheJournal.ie.

We caught up with O’Neill to find out a bit more about the book, and he shared two experiments for children with us. So if you have any budding scientists at home, here’s their chance to learn more about science.

The book looks at everything from galaxies and stars to our very own planet Earth, as well as bodies and all their cells, and on down to the very elements and atoms that make up all things.

“[My publisher] Gill asked me to do it because there wasn’t a book for kids written by an Irish scientists – there were science books, but none of them by an Irish scientist,” explains O’Neill. “Obviously my mission is to explain science to anybody, whatever age they might be.”

By a certain age, around 10 to 12 says O’Neill, children get particularly interested and enthusiastic about science – they might be fascinated by dinosaurs, or space. So it’s an ideal time to put a book like this in their hands.

“You are pushing an open door,” as he puts it. “It was really important that the illustrations and drawings be beautiful. It was really to excite kids about science and explosions and explain how wonderful the world of science is, and explain what the scientific process is.”

“It’s an Irish science book so all the examples I give are Irish where I can,” he adds. So he looks at parts of the island like the Burren and the Giant’s Causeway, and also takes in 15 Irish scientists who made a big contribution historically to science. “It’s women and men – that was a joy because I could dig out some names that people might not know who were very famous in their time, like the botanist Helen Hutchins, and tell children that Irish people were doing great science.”

It’s not just for kids, he says. “Adults can read it too. If you can explain something very complicated in a simple way, everyone wins – not just children.”

And as O’Neill puts it: “My number one thrill would be to say in 10 or 15 years from now, someone bumps into me and says ‘[you]wrote that book that really got me going and decided to be a scientist.”

To show children that science is accessible, there are around 10 different experiments included in the book, which they can do in their own kitchen.

Here are two of them. 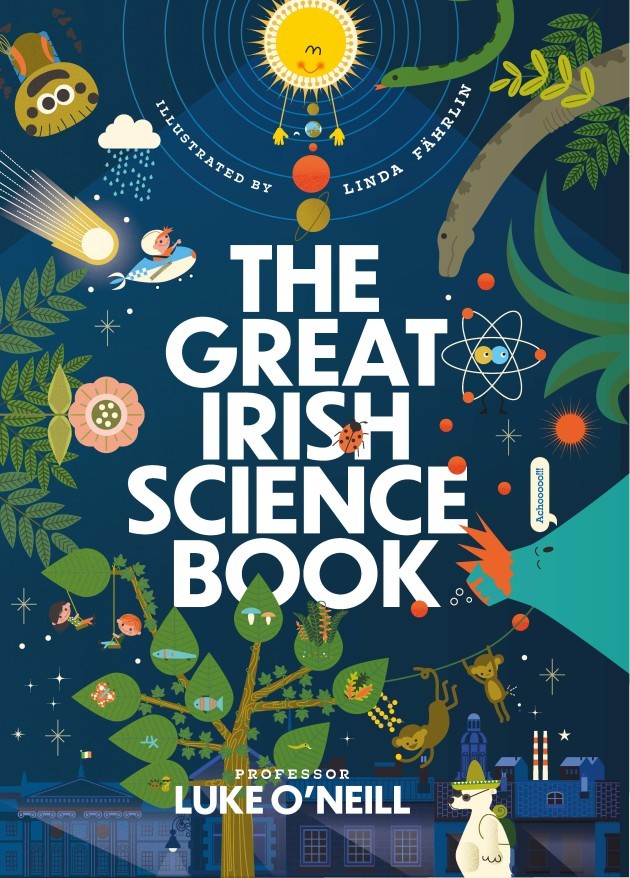 Put a little water and a pinch of salt in a glass. Now spit in it!

Add some washing-up liquid, grapefruit or pineapple juice, and some drops of ice-cold pure alcohol (a grown-up can get some white spirit from a hardware shop).

This is your DNA! It comes from the cells in your saliva.

The salt protects the DNA, and the other ingredients break down the proteins around it. The alcohol makes it visible.

I bet you didn’t know you could make a volcano in your kitchen!

Place two tablespoons of baking soda in the bottom of a glass. Add a few drops of food colouring and put the glass in a saucepan.

Quickly pour in ½ cup of vinegar. Watch for the eruption!

TIP: You could make a volcano shape out of a plastic bottle. Try adding washing-up liquid, salt or sugar to the mixture. What happens to the eruption?

The Great Irish Science Book by Luke O’Neill, published by Gill, has been nominated for the Irish Book Awards in the Best Irish Published Book category, sponsored by TheJournal.ie. The awards take place on Wednesday night – for more information, visit the website.