Vladimir Putin has congratulated his Belarusian counterpart Alexander Lukashenko on retaining his job following Sunday’s election, expressing hope that he will continue to boost ties with Moscow during his next term as president. 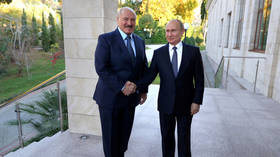 “I hope that your governance will facilitate further development of mutually beneficial Russian-Belarusian relations in all areas” Putin wrote in his message. He specifically mentioned political blocs the Eurasian Economic Union and the Commonwealth of Independent States, as well  military links within the Collective Security Treaty Organisation. Without doubt, these efforts serve the core interests of the brotherly nations of Russia and Belarus,

The rapprochement between the two neighbors “without doubt, serves the core interests of the brotherly nations of Russia and Belarus” he pointed out.

Lukashenko, who has been President of Belarus since 1994, claimed 80 percent of the vote on Sunday, while the main opposition candidate Svetlana Tikhanovskaya received less than 10 percent. The opposition claim the vote was rigged and international election monitors were refused permission to carry out their duties.

Huge protests broke out in the capital Minsk – and other cities across the country 0- after polling stations closed. There were violent clashes, with police using tear gas, water cannons, flashbang grenades and other means to disperse the crowds. Human rights activists said one person was killed, but law enforcers have denied this.