Two cargo trains have come off the rails in Saint Petersburg after a crash that saw even the tracks themselves crumpled. 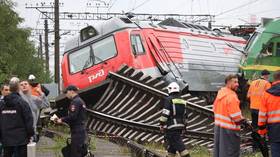 The incident took place in the south of Russia’s second city. Two trains coming from opposite directions suffered what the city emergency services called a “grazing collision” that was still powerful enough to send two giant locomotives and a freight car off the rails.

A video purportedly filmed in the aftermath of the collision shows one bulk two-section locomotive folded up almost like a jackknife, while another one is seen bumping up against the twisted rail tracks.

A local railway operator did not report any casualties resulting from the crash. However, some Russian media said that one of the train drivers was injured in the incident. Local emergency services have yet to comment.

All passenger trains scheduled to run through the area were re-routed to a backup route. The exact cause of the collision is still unknown.