Spectators were barred from the departure ceremony and first leg over ongoing fears about Covid-19. 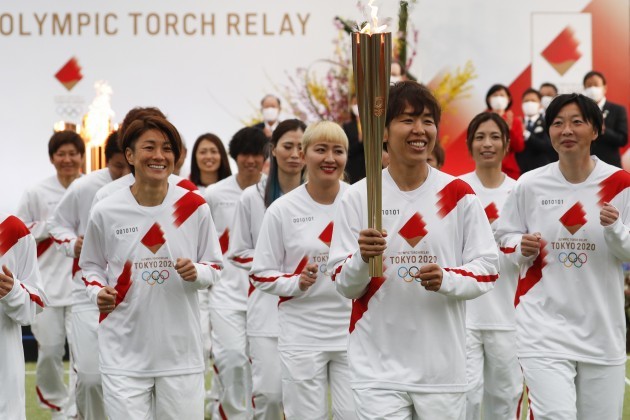 THE TOKYO OLYMPICS torch relay has gotten underway after a year’s coronavirus delay, with officials hoping it will be a “ray of light” after the problems caused by the pandemic.

Spectators were barred from the departure ceremony and first leg over ongoing fears about the coronavirus, which forced the 2020 Games’ historic postponement a year ago.

But they will line the rest of the route during the 121-day relay, which will criss-cross Japan and involve 10,000 runners before the torch lights the Olympic cauldron on 23 July.

Organisers are hoping the relay will dispel doubts about holding the Games during a pandemic, and Tokyo 2020 chief Seiko Hashimoto called the flame “a ray of light at the end of the darkness”.

“This little flame never lost hope and it waited for this day like a cherry blossom bud just about to bloom,” she told the ceremony at Fukushima’s J-Village sports complex, which was a base for responding to the 2011 nuclear disaster.

Azusa Iwashimizu, one of Japan’s 2011 World Cup-winning women’s footballers, was the first to carry the rose-gold, cherry blossom-shaped torch, accompanied by former teammates.

She passed the flame to Fukushima high school student Asato Owada, who like all the runners wore an official white tracksuit with a red diagonal stripe.

A handful of fans, wearing their compulsory masks, watched the relay from its second section. But with cheering and large crowds banned for virus safety, the loudest sound came from clicking cameras.

“I think it somewhat lacks excitement because there are rules,” Tetsuya Ozawa told AFP in the town of Naraha.

“I think more people would have come and there would have been more excitement if there wasn’t coronavirus.” 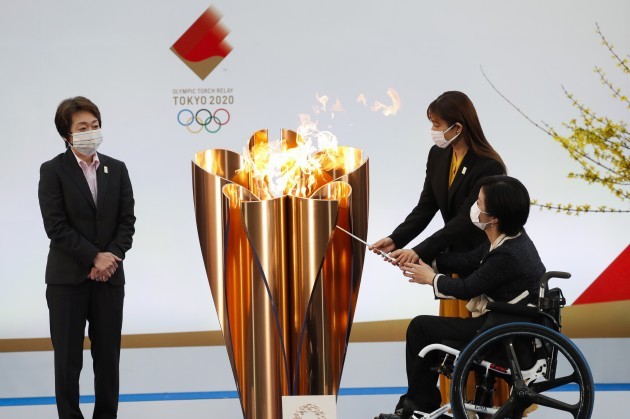 “This will be a great memory,” he told AFP. “I want to become a professional baseball player and play at the Olympics.”

Organisers were making final preparations for the relay last year when the virus prompted the unprecedented decision to postpone the Games, as sport around the world ground to a halt.

A year on, the pandemic is still in full swing despite vaccine roll-outs, and many in Japan fear the Olympics will cause a spike in cases.

Overseas spectators are barred from the Games, and limits are likely on domestic fans, so the relay is seen as a vital opportunity to build positive momentum.

The Fukushima launch also puts the spotlight back on the northeastern region of Tohoku that was affected by the 2011 quake, tsunami and nuclear disaster.

The Games were initially billed as the “Recovery Olympics”, showcasing reconstruction in the region. The relay will pass through some towns that remain only partially open to the public, as radiation decontamination continues.

In Iwaki city, the largest stop on the flame’s first day, 78-year-old Hikomitsu Onodera was dressed in the same blue blazer he wore as an official overseeing weightlifting at the Tokyo 1964 Olympics.

“It was good – sport is something that can bring everyone together,” he said, after the flame passed.

The torch will travel through all of Japan’s 47 prefectures and take in landmarks including Mount Fuji and the Hiroshima Peace Memorial Park.

Its circuitous route first heads south to the islands of Okinawa before reversing course for the northern region of Hokkaido and finally back to Tokyo.

But there are still challenges ahead for organisers. Several dozen torchbearers have dropped out, citing issues including scheduling conflicts and concerns about the coronavirus.

Officials from one region have warned they might cancel the relay there if virus countermeasures aren’t improved, and parts of the event will be suspended if too many people gather.

Organisers are hopeful however that the relay will offer respite after a difficult year, and convince the public that the Games will go ahead.

“It really feels like the Olympics have started,” spectator Fumie Hasekura told AFP in Iwaki.