Russia’s National University of Science and Technology (MISIS) plans to develop a spacesuit for the crew of the new Russian spacecraft ‘Oryol.’ which is projected to begin manned missions in 2025. 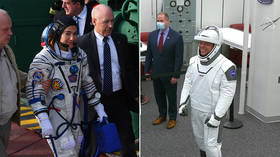 Its designer ruled out simply purchasing kit from abroad, making a point of lashing America’s SpaceX for having poor quality equipment which he said was created with PR in mind, rather than safety.

“This is a very serious enterprise with a glorious history,” said Vladimir Pirozhkov, the head of the MISIS engineering center, noting the importance of Russia making their own space technology.

Working with R&D Production Enterprise Zvezda, a manufacturer of life-support systems for high-altitude flight and human spaceflight, the university will help design a domestically-produced spacesuit. Zvezda is a state-owned company based in Tomilino, near Moscow.

“I am sure that things of such strategic importance cannot be purchased from Elon Musk or the Chinese,” he said.

Despite Russian praise of Musk’s SpaceX and NASA, particularly from space agency chief Dmitry Rogozin, Pirozhkov took a swipe at the safety of the US spacesuits.

Dear @JimBridenstine, it’s safe to congratulate you at this point with a successful launch and docking. Bravo! I know how anxious you were for this major event to become a success. I wish @NASA team to successfully finish up reconstructing its national space transportation system

According to the engineer, SpaceX suits are more about “creating the look of Hollywood superheroes” rather than safety, explaining that the Americans “have always been at their best in public relations.”

“This is not really a spacesuit. It is personal protective equipment, sent from Earth to the International Space Center (ISS) by fashion designer Jose Fernandez,” he explained.