More Russian cities have canceled their second attempt at a World War II victory parade due to fears around Covid-19. At least ten have stopped or postponed planning so far, but Moscow’s showpiece ceremony will still go ahead. 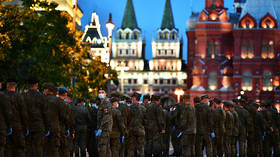 The events normally take place annually on May 9, with the capital city hosting the main spectacle, which is broadcast around the world. Most towns also have smaller parties. This year’s celebrations, which will mark the 75th anniversary of the Soviet victory over Nazism, were postponed due to Covid-19 and moved to June 24.

On Monday, authorities in Chelyabinsk and Yakutia announced they had taken the decision to cancel their re-scheduled events. These two municipalities join the likes of Belgorod and Yaroslavl, while other local governments, such as in Kursk and Penza, have already announced that festivities will be postponed.

June 24 will be the 75th anniversary of the first ever victory parade, which took place on Red Square in 1945.

Speaking to reporters, Dmitry Peskov, spokesman for President Vladimir Putin, said that the Kremlin is happy with each local head making their own decisions. “This is the prerogative of regional leaders,” he explained. “As the president said, the governors are on the ground and have a better understanding of how things really are.”

Peskov also expressed support for Moscow Mayor Sergey Sobyanin, who asked Muscovites not to go to the parade in person, but to watch it on TV. “On television, [the parade]is seen much more colorfully,” he said, calling the production “a masterpiece.”

The capital’s performance will feature participation from nineteen armies around the world, and will include 225 units of weapons, military, and specialized equipment, as well as 75 units of aircraft.

Share. Twitter Facebook Google+ Pinterest LinkedIn Tumblr Email
Previous ArticleTwo-thirds of men turn to alcohol to combat loneliness and boredom during Covid-19 pandemic
Next Article Racism In US: Democratizing Political Power Is Necessary To Guard Against Abuse In The Incarceration System