Russians hoping to hit a warm foreign beach before the summer heat subsides saw their hopes dashed on Monday as media reports promising the re-opening of more international flight routes were refuted by authorities. 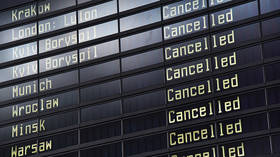 A glimpse of hope for travelers appeared when Moscow daily Izvestia published a report citing sources, including one in “a major Russian airline,” saying more countries were set to join the UK, Turkey and Tanzania on the list of accessible destinations.

According to the newspaper, Russian aviation authorities had been considering several cities in France, Hungary, Egypt, Cyprus, Jordan, Malta and China as the next candidates for resumed flights.

No date for any resumption was mentioned but Izvestia said a decision “might be announced at the next meeting of the anti-coronavirus emergency unit” due on Tuesday.

Just a few hours later, the office of the Russian Deputy Prime Minister Tatyana Golikova, who is in charge of coronavirus containment operations, denied the report stressing that “so far” there was no news regarding the possible resumption of international travel, besides the handful of destinations already opened.

On August 1, Russia resumed flights to three countries only – the UK, Turkey and Tanzania, while citizens and residents of these countries can also enter Russia.

Whether or not Russia will resume international flights in the foreseeable future, the local travel industry is not getting too excited, as only limited traffic is expected.

The timing for the resumption of international flights could hardly be called optimal, according to an analysis from tourist industry website Tourdom. Incoming travelers will still be thoroughly filtered by the authorities at destination, thus no mass tourism can be anticipated. Besides, the high season has ended, which also limits demand for international flights.

Despite uncertain prospects for travel abroad, some brave Russian tourists have already started to book tickets to the United Arab Emirates for the upcoming New Year holidays. Currently, the Gulf country remains closed for Russian travelers, but rumors suggest it could be opened in September. So, booking tickets to the UAE is “like playing Russian roulette,” Tourdom says, as many airlines give no guarantee of ticket refunds.