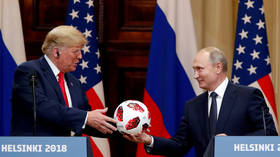 Presidential spokesman Dmitry Peskov told journalists on Friday that Putin does not believe he can exploit or control the US leader.

“No, Putin cannot play Trump like a ‘fiddle’. What he thinks about Trump, he himself has repeatedly said in many interviews,” Peskov explained.

Bolton’s memoir, due to be published next week, has set off a storm of controversy in the US. The former official describes Trump as a person who trusts Putin more than his own intelligence services. Bolton also alleges that the Russian president perceives Trump as a weak opponent.

In one instance, Bolton writes that Trump asked an aide whether Finland was part of Russia. The US president has slammed the book as a mixture of lies and fictional stories.