A Russian reporter has been fined for not following the instruction of a police officer who broke his arm at a polling station, during last month’s vote on far-reaching amendments to Russia’s constitution. 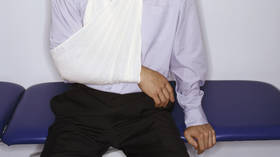 David Frenkel, a correspondent for the alternative media outlet Mediazona, was fined 2,500 rubles ($35) by Saint Petersburg’s Dzerzhinsky District Court, for a combination of interfering with the work of the election commission and for not obeying the command of a law enforcement officer.

On June 30, Frenkel was restrained by a policeman and an election observer during the country’s plebiscite on proposed constitutional amendments, after the journalist refused to leave a polling station following a request of the local commissioner. The Mediazona website was founded by Pussy Riot members Maria Alyokhina and Nadezhda Tolokonnikova.

According to reports at the time, the station’s head had refused to fill out the paperwork to register Frenkel as an observer. When being taken out of the building, the journalist’s arm was broken, and he subsequently underwent surgery.

“I was grabbed by the arm, and they twisted it. I tumbled to the floor, and they punched my right forearm. After all that, my arm was broken, and I screamed very loudly in pain,” he explained, shortly after the incident.

The police report against Frenkel explained that he’d “resisted” and “pushed employees away,” which “provoked a conflicted situation” at the voting site. The policeman responsible for the arm break, Denis Dmitriev, explained that he’d removed the journalist at the request of the polling station’s chairperson.