As a lot of key economies emerge from Covid-19 lockdowns, the financial cost of the pandemic is becoming apparent. With many countries already posting massive GDP falls in April and May, the alarm bells are ringing. 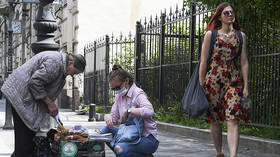 How will the crisis affect Russia? Especially in terms of personal incomes and the country’s already problematic levels of inequality. Also, what sort of hit can the middle classes expect, and how might it soften consumer demand?

Some warn of a potential personal debt crisis, and others foresee a hollowing out of the services sector. Of course, these worries could be misplaced. Perhaps there will be a quick recovery, and the feared autumn second wave of coronavirus won’t materialize.

RT spoke to two top Russian experts who gave their views on the choppy waters ahead.

Ivan Tkachev is the economics editor at RBK, a daily newspaper and Russia’s most widely read business publication.

“The official forecast from the Economy Ministry is that real disposable incomes of Russians will drop 3.8 percent this year and partially rebound in 2021 (by 2.8 percent). Without government measures to support households, the real decline in incomes would definitely be worse. But not very much, I think.

The problem is that the support package for consumers is not very large – around 800 billion rubles ($11.4 billion) – and it is largely concentrated on the most vulnerable social groups or middle-class families with kids. A typical family with two kids (around three-quarters of families in Russia) will receive up to 25,000 rubles ($357) each in the second quarter of 2020, in additional social benefits. There are no payments planned beyond June.

In my example, this translates to 6,250 rubles ($90) per member of a household, or roughly $30 a month. Compare that with the 32,500 rubles ($465) per month of cash resources available to an average Russian household (according to Rosstat data for 2019), or 47,000 rubles ($672) for the “core” middle class, according to Higher School Economics research, and you’ll see that the government’s paychecks add roughly 4.5-6.5 percent to typical household income this year – not a huge sum given the magnitude of the crisis.

Independent economists predict at least an eight percent fall in real disposable incomes this year. In theory, the government could spend much more on social support during the crisis, but they perceive it as throwing money down the drain.

The middle class – an elusive concept for Russia – will definitely shrink in 2020-2021. According to 2019 estimates, 38 percent of Russians belong to the broader middle class, but there are only seven percent of the population that share all socio-economic features of the middle class (countryside residence, or dacha; money in savings, etc.). The lower stratum of the middle class is under risk of transition to joining the poor. Small entrepreneurs will see their businesses downsizing significantly or shutting down. Inequality will probably rise, because the rich will stay rich while the middle classes will become poorer.

As for the implications it may have for Russia’s domestic politics, I think more people will demand political change, more representation, and more accountability from officials.

There won’t be a quick recovery, but I don’t expect any socio-economic catastrophe. If GDP is down five percent for this year as the government expects, it will probably be fine. In case of a deeper slump (Between six and eight percent, as expected by others including the World Bank and OECD), it would be more problematic. There is only a small probability of an unpaid-debt spiral so far because the government has assumed much of the potential liabilities of businesses through programs of loan guarantees and subsidized loans. If some of that debt becomes non-performing, the government has considerable leeway to take losses on those assets that could potentially go sour.”

“Average wages in rubles were static through February 2020, but down in euro and dollar terms, while domestic inflation declined from 4.5 percent in 2019 to 2.6 percent through April 2020. This means that, pre-pandemic, Russian real wages were under pressure. This risk accelerated, most likely through May 2020, with nominal wages falling due to reduced hours of work, lower employment, and some workers falling outside the pandemic-related fiscal support schemes.

While forecasting is a perilous exercise at a time of severe uncertainty induced by the current crisis, it is likely that aggregate consumption in Russia will shrink 0.9-2.5 percentage points in 2020. Investments will fall around 6.5 percent, and imports will shrink more than 10 percent.

The most recent consensus estimates are for the Russian economy to contract between 4.7 and five percent in 2020. Inflation is likely to be in the region of four percent in 2020 as a whole – again, lower than last month’s forecast, but still sizeable. My view is that private consumption is likely to drop 5.3-5.5 percentage points in 2020 and will not recover until mid-2022.

Wages will fall 6.3 percent this year, recovering partially by 4.5-5 percent in 2021, and regaining real levels of 2019 by mid-2022, at the earliest. Based on my outlook, by the end of 2022, Russian real wages are likely to be only 3.8 percentage points higher than they were at the end of 2014. The same view is supported by the figures and forecasts for retail sales. Based on my expectations, by the end of 2022, Russian retail sales will be in real terms some 8.6 percentage points below their levels at the end of 2014. Using longer-term forecasts, it is unlikely that retail sales will recover to their end-of-2014 real levels until mid-2027. Consumer confidence has been in double-digit negative territory from the third quarter of 2019 through to the first quarter of 2020 (the latest data indicates sharper declines so far in Q2).

All of this means that the middle class in Russia is going to suffer both short-term losses (consumption and real incomes) and longer-term life cycle losses (reduced investment and higher precautionary savings).

The problem is that Russia has very limited room for alleviating the medium-term burden on the younger middle class and upper-middle-class cohorts. These are demographic groups that carry most of the private household debt and need to continue sustaining higher levels of indebtedness in the near future.

Russian monetary policy, however, is too tight to allow simultaneously shrinking or static real incomes and high debt levels among younger households. The Central Bank should be targeting a key policy rate at around 2.5 to three percent in 2020 and 2021, while the current forecast for 2020 is at around 4.5 percent, rising to 4.75 percent in 2021.

Russian fiscal policies are sound on the aggregate balance sheet basis, but these policies do not support significant public and private investment, and as such are not driving upward momentum in capital deepening (necessary for the aging stock of capital and lack of significant R&D investments in the private sector), and they are not supportive of re-orientation of the Russian economy away from domestic services and extraction sectors. Absent aggressive tilting in the Russian economy toward higher capital intensities and more rapid technology adoption and diffusion, and more export-oriented and import-substitution production, Russian upper-middle-class incomes are likely to stagnate or decline in the current decade.

When looking at dollar comparisons to rubles, it’s worth bearing in mind purchasing power parity (PPP). Put simply, a dollar goes much further in Russia than in much of the West. The OECD uses an exchange rate of 25 rubles to the dollar to measure Russian PPP.

At the time of writing, the market exchange rate is 69. On average, this means that a dollar has 2.7 times more value than in the United States. So, in other words, a Russian earning 69,000 rubles a month ($1,000) has the same purchasing power as an American on $2,700. It’s also necessary to point out that Russia, like pretty much all post-Soviet states, has a considerable black economy. The IMF estimates it at 38 percent of GDP, versus only eight percent in the US. So, a lot of Russians have “off the books” income not factored into official statistics.”