The tests of Russia’s ship-based Zircon missile – one of several hypersonic weapons introduced by the country’s military – are successfully nearing completion, the Defense Ministry has said. 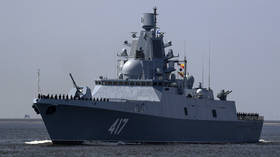 The recent dry runs, which were performed from aboard the Admiral Gorshkov frigate, have “confirmed the unique tactical and technical characteristics of this missile, as well as its ability to travel at hypersonic speeds,” the MoD said in a statement.

The Zircon will be able to reach speeds of up to Mach 9, nine times faster than the speed of sound. It will have an operational range of 1,000km, capable of hitting both water and land-based targets. The Defense Ministry said the Zircon is going to be placed on nuclear submarines and surface ships, but there are also plans to develop a ground-based version of the weapon.

Tests of the Zircon kicked off late last year, with Deputy Defense Minister Aleksey Krivoruchko saying that the missile is expected to come into service sometime in 2021 or 2022.

Russia apparently became the first nation to put a hypersonic weapon into use after the Avangard glide vehicle was introduced in December 2019.

Besides the Avangard and Zircon, the country’s ambitious hypersonic program also includes the air-launched Kinzhal (dagger) cruise missile. It too is undergoing tests at the moment, but it was already shown to the public during Victory Day parades on Red Square over the last few years.

The whole world, including superpowers China and the US, are chasing after Russia when it comes to hypersonic military technology, Russian President Vladimir Putin has claimed. But when they finally obtain these types of weapons, “we will have the means of combating them,” he stated.