DUHAN VAN DER Merwe scored a sensational try in the 85th minute as an extraordinary Six Nations championship ended as dramatically as it began.

Having defeated England on the opening weekend, their first victory at Twickenham since 1983, the Scots have now beaten France away for the first time in 22 years.

To think that their home form – recently so good – let them down. Had it not, Scotland may well have won their first Grand Slam in 31 years.

As it is they still have much to celebrate. The talk in advance of this game was centred on France getting the 21-point winning margin they needed to steal the championship away from Wales. 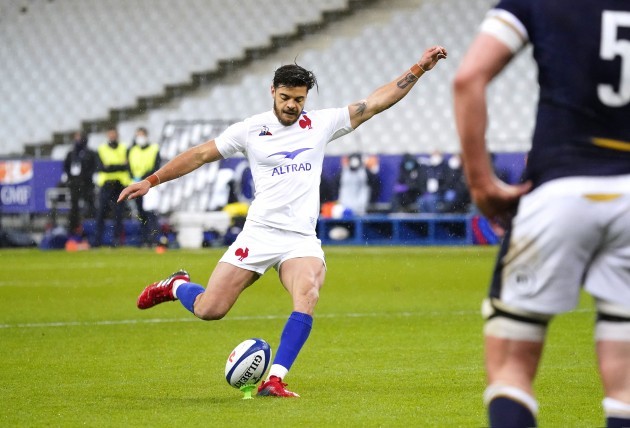 Instead, they were talking about the comeback to end all comebacks – after 14-man Scotland recovered from Finn Russell’s dismissal to get a stoppage time try from van der Merwe and seal the win.

You couldn’t take your eyes off this game from the start – Scotland establishing a surprising 10-3 lead on 18 minutes when van der Merwe bustled his way across the line, Russell converting that try, as well as adding a penalty.

The Scots were looking good, although not quite as good when Romain Ntamack reduced that gap to four points shortly afterwards.

WHAT A TRY! 🇫🇷

By half-time, France were ahead – 13-10 – Stuart Hogg heading to the bin for a cynical foul on his tryline; Brice Dulin showcasing his range of talents again with a score on 37 minutes.

Yet the try everyone was talking about was still to come. It started in the French 22, it ended in Six Nations folklore, Damian Penaud with the finish after he chipped ahead and won the chase to touch down. Conversion missed by Ntamack, the score was 18-10 and thoughts still focussed on that 21-point gap.

But France couldn’t get to their magic number.

Instead, Russell cut the gap with a penalty and Dave Cherry then gave Scotland the lead with a try, his third in two games.

There was still time for Russell to get red carded, for France to retake the lead through Swan Rebbadj, for France to mess up in injury time when they tried to counter attack from inside their own 22, coughing up a penalty, which allowed Scotland go for the win.

They got it too – Hastings spinning a pass wide to van der Merwe who held the catch, and his nerve, before crossing.

Afterwards Hogg said: “We knew what we were about coming into this week, and we’ll be kicking ourselves at some lost games. We enjoyed winning tonight and this has been a squad effort, including the boys who are sitting at home and not allowed to be selected. I’m the captain of a very proud nation and we will continue working hard.”