Scottish Justice Secretary Humza Yousaf reeled off a list of positions in Scottish public life, all held by white people. But he conspicuously failed to mention that Scotland is 96 percent white, as it didn’t fit the narrative. 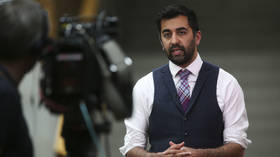 A strange and confusing scene befell the Scottish Parliament earlier this month. Like most people on the planet (and indeed in Scotland), the incident passed me by at the time, but it came to my attention after footage began circulating on social media.

The clip in question features the Scottish Justice Secretary Humza Yousaf reeling off a list of positions in the Scottish legal profession and law enforcement, and then saying – or more accurately, spitting – the word “white” after them.

You might think he was describing the colour of tiling they had all opted for in their bathrooms. But no, Mr Yousaf was pointing out the melanin levels of these senior lawyers, judges and policemen.

Once he was done with his own purview of law, he moved on to other areas such as medicine (white), trade unions (white), and directors general of the Scottish government (you’ve guessed it, white). When he reached the end of his little list he added “that is not good enough.”

Mr Yousaf, who is not white, then decided he would talk directly to his pastier constituents and said: “As people of colour, we don’t need your gestures. Don’t just tweet Black Lives Matter. Don’t just post a hashtag. Don’t just take the knee. Don’t just tell us how you’re not a racist – I take that as a bare minimum. You must be anti-racist.”

Scotland is 96.5% White. Make what you will of his delivery. #HumzaYousaf#Racisim#Scotlandpic.twitter.com/QCqvrcf2Cs

You can judge for yourself Mr Yousaf’s tone while he is pointing out the skin colour of his colleagues in the clip above.

Whatever your assessment of the Scottish justice secretary’s impromptu ethnic survey of public life in Scotland, he failed to mention one (I would argue, rather important) fact: Scotland is more than 96 percent white.

Yes, from Hadrian’s Wall to the Shetland Islands, less than four percent of Scotland’s inhabitants are anything other than white. This is not a criticism of the country; it is a fact, just as it is that less than one percent of Scotland is black – which might go some way towards explaining why it hasn’t as yet had a black high court judge or chief constable.

What makes Mr Yousaf’s statement truly perplexing, though, is that here we have a senior member of the Scottish Nationalist Party and Scottish Government apparently complaining that Scotland is full of native Scots. His speech took place as part of a broader debate held in the Scottish Parliament on racism in Scottish society, although “debate” is an odd word for a situation where no one put forward a contrary opinion.

For two hours, the entire Scottish Parliament – Tory, Labour, SNP, Lib Dem and Green MSPs alike – reeled off reasons why Scotland was an awful, xenophobic and systemically racist country. When they weren’t discussing their own failings, they took the opportunity to make “orange man bad” observations about the state of the USA.

Now, I’m not Scottish. But if I were, it would peeve me somewhat to see my national parliament indulging in self-flagellation just so its members could flaunt their virtue. It will also be interesting to see how much time they devote to discussing the knife attack that occurred in Glasgow at the end of last week, seeing as they devoted over two hours of parliamentary time to a crime that happened 4,000 miles away and involved precisely zero Scotsmen.

The whole display struck me as a perfect microcosm for the wave of societal self-hatred sweeping across the West at the moment. The populations of the freest and most prosperous societies to ever grace the face of the Earth are currently in the grip of a spasm of irrationality that has caused them to see their own countries as evil.

We have spent the entire month of June berating ourselves for being riddled with racism, bigotry, misogyny, homophobia, transphobia, Islamophobia and God knows what else. We have literally torn down national heroes or boarded them up because we’ve now decided they were bad people.

We have exclusively focused on bad things in our history, despite the fact that those sins are universal, committed by every culture in history. No credence has been given to the achievements of Western civilisation; the fact it was the first society in history to attempt to abolish slavery on a global scale has been deemed irrelevant.

The fact that most of the world’s functioning democracies were born out of this history is ignored. That Western Europe and North America are observably the best places to live if you are a minority of any description is discounted. The West is behaving like an angry, depressed, self-loathing teenager.

What these protests and parliamentary debates point to is a victory of narrative over facts. The progressive neo-Marxist left has managed to gain control of the narrative, and as a result all we hear are people, places and corporations flinging their support behind causes they do not understand.

Would a corporation acting rationally willingly throw its support and plough millions of dollars into the coffers of an organisation that is committed to the “overthrow of capitalism”? No, but they have, for that is what the organisation Black Lives Matter is committed to. But these are facts, not narrative, so they are ignored.

Would an organisation allegedly committed to saving the lives of black people focus solely on a very small subset of black deaths? No, but again, the fact that homicide is the leading cause of death for black men under 44 years of age in the United States and those killings are overwhelmingly committed by members of that same group doesn’t fit the narrative. Therefore, it is ignored.

This is exactly the case with Humza Yousaf’s rant about the lack of BAME people in high-profile roles in Scottish life. The reason most of the top jobs in Scotland are held by white people is because Scotland is made up overwhelmingly of white people. But it doesn’t fit the narrative, so it is ignored.

We need to start talking about facts, not feelings, before we tear everything down just because we are angry. Anger has ripped down many things; rarely has it built anything to replace them.