Russia’s parliament has approved a bill to boost ‘patriotism’ education in the school curriculum, designed to instill children with respect for the memory of those who fought to defend the country, its laws and traditions. 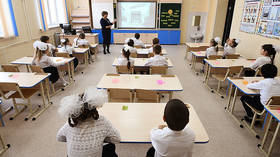 Aside from promoting respect to the nation, the amended law on education also obliges schools to teach kids to treasure Russia’s multicultural heritage and traditions, as well as nature and the environment.

The new legislation amends Russia’s current educational law, adding the requirement that schools include the formation of a “sense of patriotism” to their pedagogical goals, as well as “respect for the memory of the defenders of the Fatherland and the achievements of the Heroes of the Fatherland.”

Once President Vladimir Putin signs the new text, the bill will come into force on September 1. Schools will be expected to implement the new curriculum by the start of the next school year, in September 2021.

Earlier this summer, following a nation-wide vote, the country’s constitution was amended to say that “The Russian Federation honors the memory of defenders of the Fatherland and protects historical truth.” According to the official website of Russia’s lower house, the State Duma, this is linked to the government’s obligation to “create conditions that contribute to the comprehensive spiritual, moral, intellectual and physical development of children,” as well as “fostering patriotism.”