The container ship has been stuck in the Egyptian waterway since yesterday. 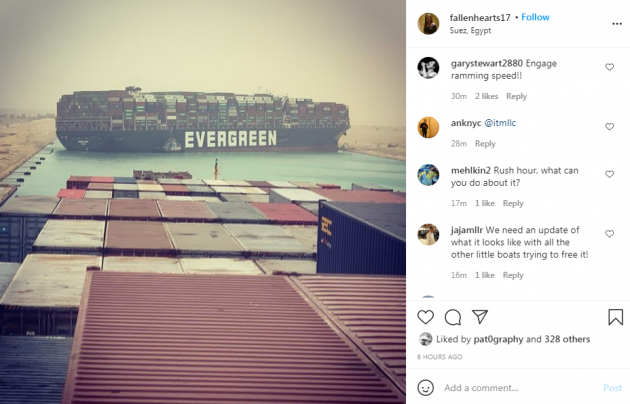 EGYPT’S SUEZ CANAL Authority (SCA) has attempted to free a giant container ship that ran aground and blocked one of the world’s busiest trade routes yesterday.

The 400m-long Ever Given cargo ship, which sails under the flag of Panama, ran aground and turned inside the canal as it travelled north towards the Mediterranean Sea, en route from Yantian in China to Rotterdam.

The ship is reported to have veered off course during a gale-force sandstorm, which blotted out light and limited the captain’s ability to see clearly.

The SCA said the incident happened “due to the lack of visibility due to the weather conditions when winds reached 40 knots”.

The authority’s chairman Admiral Osama Rabie earlier said that rescue and tug units would continue their efforts to free the Ever Given, adding that historic sections of the canal were being opened in a bid to ease the bottleneck of backed up marine traffic.

A source at the SCA later told the AFP news agency that the first of the ships stuck north of the Ever Given had entered an alternative navigational channel and made its way towards the Red Sea to the south.

Photographs released earlier by the SCA showed excavators onshore digging soil from the canal’s bank, the earth-moving equipment dwarfed by the giant ship towering above.

The shipping tracker website Vessel Finder shows Ever Given wedged between both sides of the canal, surrounded by smaller boats. 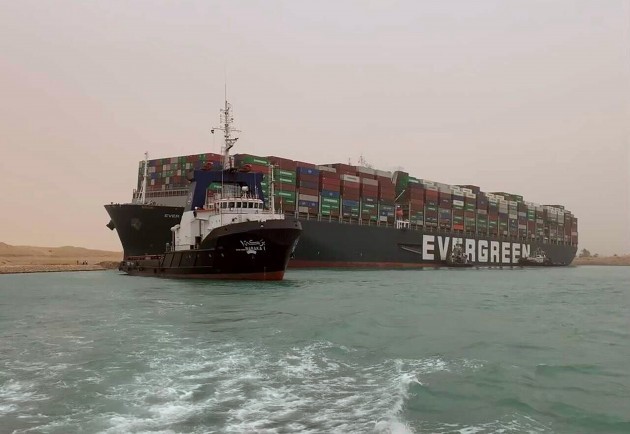 In this photo released by the Suez Canal Authority, a boat navigates in front of the Ever Green.

One image posted on social media by Instagram user Julianna Cona shows the ship stuck in the canal with other vessels unable to pass it on either side.

The canal, built in 1869 to connect the Mediterranean to the Red Sea, is the shortest maritime route from Europe to Asia.

It is currently not known how long it will take to free the ship and clear the canal.

Ship operator Evergreen Marine Corp said the Rotterdam-bound vessel “ran aground after a suspected gust of wind hit it”.

Storms with dense dust clouds carrying fine sand have swept across much of the Middle East since Tuesday.

Shipping monitors MarineTraffic said the vessel had been in the same position since at least Tuesday afternoon.

Even a short closure of the route has a big impact on “just in time” logistic chains, said Camille Egloff, transport and logistic expert at Boston Consulting Group.

While she said the ship was in a “hyper-controlled environment” and that it could be “a matter of hours” before traffic was moving freely again, Egloff added that costs could add up.

“It costs a lot of money, because it blocks the traffic behind,” she said. “There will be a domino effect in all the European ports in the coming days.”

Bjonar Tonhaugen, head of oil market research at Rystad Energy, also warned that if the blockage lasts for more than a few days, it could impact prices more and for a longer time.

– With reporting from AFP