It’s not quite Robin Hood, but it’s close. Russia’s Ministry of Finance is planning to transfer the confiscated suspicious savings of Russian citizens to the country’s pension fund, according to newly proposed amendments. 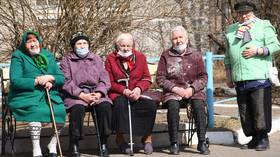 So, if you can’t prove where your money came from, it’s going to the old folks.

As things stand, illegally held assets can be seized by the state. If the proposed new amendments pass through parliament, any money taken because the owner can’t prove the source of the moolah will be sent to the Russian Pension Fund (PFR), which is responsible for payments to pensioners and other forms of social security.

Valentin Shurchanov, a member of the parliamentary committee on Budget and Taxes, explained that the Pension Fund currently has a deficit of around 650 billion rubles ($9 billion). But bear in mind that the official deficit figure is somewhat lower, at 118.4 billion rubles ($1.63 billion).

“The pension fund needs to be strengthened,” said politician Mikhail Ermelyanov, from the parliamentary opposition ‘Fair Russia’ party, suggesting that unproven income could be just one additional source of money.

The newly proposed amendments would not be the first time that confiscated money has been handed to the country’s pension fund. As part of the controversial 2018 pension reform, a law was passed that sent money gained through corrupt activities to the PFR budget.