Ireland are playing the World Cup hosts in Hungary tonight, in one of the most absurd international football matches in recent memory.

SO, WHERE’S THE stranger place to be?

In Hungary for a friendly against Qatar in the middle of a pandemic?

Or at the bottom of a World Cup qualifying table looking blearily at Luxembourg and asking, ‘Wait…is this our level now? Are we now a country that just loses to Luxembourg?’

To contextualise the first part: Fifa have arranged for Ireland to fly to a city deemed acceptably biosecure by national governments to play a meaningless game in an empty stadium to help prepare Qatar for the World Cup they are insanely hosting.

So now, sadly, to the second part.

Some of the reaction to Saturday’s incident focused on Irish football’s big picture, an existential debate we’re now having at a rate better associated with French Modernists.

Perhaps the lesson of Saturday night is that we simply underestimated the hangover of Irish football’s Champagne Football Years. Regardless, we are now firmly in the take-another-two-Panadol-and-sit-down-in-the-shower phase of it all. We might be ready to get dressed by the mid-2020s.

The rest of the reaction focused on Stephen Kenny himself. Kenny acknowledged it was unacceptable to lose on Saturday night, accepting criticism would follow. At yesterday’s press conference he admitted the shortcomings to Ireland’s approach on that night but didn’t accept all of the flak that flew his way, rejecting Tony Cascarino’s claim that he is “tactically ignorant” when it was put to him.

Kenny isn’t fighting for his job – the FAI vote of confidence probably went further than it needed when Roy Barrett said a contract renewal very much remains on the table – but he is now at the point at which he needs to convince his growing number of sceptics he is the right man for the job.

He has at least showed he wants to do that, carrying a far more convincing demeanour at yesterday’s pre-game press conference than he did on Saturday night, where he cut a dejected and torpid figure.

Far more ebullient yesterday, he more quickly and directly throughout, at one point defending his young players from a criticism he raised.

“There are some suggestions that they’ll all end back playing in Ireland and that they’re not that talented. All those players that have come in – Dara O’Shea, Jason Knight, Jayson Molumby, Aaron Connolly, Caoimhin Kelleher, Gavin Bazunu and all of those players, they will all have good careers a the top level. They are going to be good players for Ireland in the future. They are talented players, and you will see them blossom.”

Later, when asked what message would he give those who are growing unconvinced by his credentials, initially meandering thoughts suddenly coalesced into a moment of sheer, passionate conviction. “Collectively, we have the capacity….I want to build a team that really exhilarates Irish football people. And that’s it. Nothing more than that.” 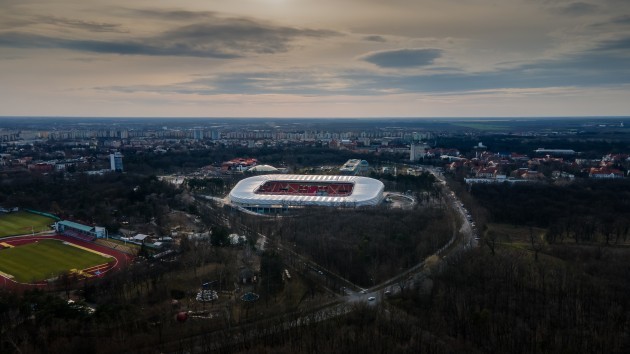 An aerial view of the Nagyerdei Stadium in Debrecen, the venue for tonight’s game.

His voice faltered slightly at the end of the sentence as he seemed to grow emotional, though it was difficult to tell through Zoom’s pixels whether there were tears forming in his eyes. Nonetheless, it’s those moments of utter clarity and conviction his team needs to start showing on the pitch.

Earlier, Kenny was asked whether his players would be following Norway, Germany and the Netherlands in protesting ahead of the game – he didn’t know, he said, it was up to the players to decide – but then gave a thoughtful opinion on the subject of the protests.

“There is a clear issue with human rights in the building of stadiums in Qatar, and the number of people who have died. You can’t sweep that under the carpet, it can’t be ignored….it’s not acceptable for so many people to lose their lives. The disparity of wealth between rich and poor, to have people living in conditions of squalor and have people dying in those conditions is not acceptable.”

Regardless of your thoughts on him, that Kenny gave his opinion on this – without being asked – is highly admirable, and he did so on a press call featuring local journalists and the Qatari state broadcaster BeIN Sports. Other socially-conscious managers have let themselves down on this question, including Jurgen Klopp, who landed in Doha for the 2019 Club World Cup and responded by saying he wasn’t the right person to ask about human rights abuses in Qatar.

As for the actual game: Enda Stevens and Matt Doherty are the latest injury victims, so his wing-backs are out though Kenny didn’t commit to saying he would be reverting to a back four. It’s hard to imagine he won’t choose that system, however, given sticking with 3-5-2 and its injury-enforced square pegs would repeat the mistake made in the second half of last Saturday’s game and just amplify further criticism.

There will be changes to the team, and perhaps Kenny’s most pragmatic move is to give minutes to those who have barely played to date in the interests of keeping as united and happy a camp as possible.

Given he has a nine-day camp in Spain along with friendlies against Andorra and Hungary in June, perhaps that is the time to use selections to build some coherence ahead of the Autumn’s daunting qualifiers.

Thus older players like Shane Duffy and Jeff Hendrick may return to the team, though there is an argument to be made that his younger players could do with every minute of senior international experience they can get. Troy Parrott should come in for his first senior start.

It’s stating the blindingly obvious to say the manager could do with a win tonight, solely so he can lose his ‘winless’ tag. Ireland, though, are currently in no position to expect to beat Qatar.

They have beaten Azerbaijan and Luxembourg this week, and have built up a bank of experience in their World Cup preparations over the last couple of years, winning the Asia Cup in 2019 and playing Colombia and Argentina in the Copa America of the same year. (The Copa regularly invites teams outside of South America – we might as well throw in an application at this point.)

Given the fact tonight is a friendly – albeit one of the more absurd staged in the history of international football – and the severity of the defeat to Luxembourg, it’s difficult to envisage anything happening tonight that can substantially change the mood lingering from Saturday night, so giving fringe players a game and maintaining the squad’s unity may be a better priority for Kenny at the expense of chasing a win that, we have to honest, might not come anyway.

Because regardless of the result of this night as Qatar’s sparring partner, Kenny will just have to roll with the punches of the ongoing Luxembourg inquest.