If there’s one place you’d least expect to see a forest fire, it’s perhaps inside the Arctic Circle. However, in the last week, wildfires in Siberia have increased nearly fivefold – and they are occurring further north than usual. 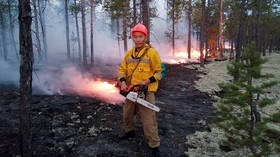 As temperatures in Russia’s far north increase to above 38C (over 100F) – breaking Arctic temperature records – 1.15 million hectares of forest is on fire, with the vast majority in the region of Yakutia.

Aleksey Yaroshenko, the head of the forest program of the Russian branch of Greenpeace, believes that extinguishing these fires is an insurmountable task.

“Even if we throw all our efforts at [putting out the fires], it is already impossible,” he said. “The situation is the same as last year. We are at the foot of the peak of fires, and have already noted a very sharp increase.”

Not only are wildfires increasing in volume, but they affecting areas once considered immune. According to media reports, the European Union’s Earth Observation Programme spotted flames at a latitude of 72.723°N in Yakutia, usually associated with some of the lowest-ever recorded temperatures.