The London police shooting suspect had ammo on him, so why wasn’t he searched properly? Could it be incompetence, or have the attacks on the police’s treatment of ethnic minorities made officers scared to do their jobs correctly? 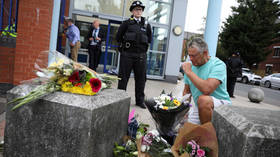 The whole of Britain was shocked to hear of an officer being shot dead inside a police station in Croydon in the early hours of Friday morning.

The more you learn of the circumstances, the more dreadful the incident becomes. How could a well-respected, unarmed desk sergeant with nearly 30 years in the job be shot in the chest by a detained suspect in his own police building?

All of us want to know some key things: why wasn’t the suspect searched properly? How was he able to take out a gun, possibly hidden in his clothing, and shoot the sergeant?

Feelings within the police and their families over these sort of incidents are very raw. Even after 30 years in the police, and with nine of my family having been in the Metropolitan Police as well, they are for me. I am disturbed that something like this has happened.

Say what? BBC rolls out bizarre story of ‘more than 1,600 police officers’ killed on duty… since 19th century

Yes, the suspect who appears to have shot himself is a very wicked man, but there are lessons to be learned and since that in many of our cities there are guns on the street everywhere, these lessons must be learned immediately. For the sake of not only our police officers, but those they are here to protect.

It is not good enough to wait for the outcome of the murder enquiry by the Met, or a laboured and normally incompetently-run investigation by the inexperienced investigators of the ‘independent’ police complaints body (IOPC), or an inquest. This will take many, many months; meanwhile, our police officers and all of us will continue to be at risk if the lessons are not learned immediately.

So why wasn’t the suspect searched properly after being arrested in the early hours of the morning in a ‘Stop and Search’ operation, and it being found that he had drugs and ammunition on him?

Wasn’t finding ammunition a clue – a strong indicator that he might have a gun to fire such ammo? As a long-serving former police officer it makes me ask such things as: what was the level of training of the arresting officer? Were they new to the force, with little street experience? Or perhaps they were a special constable, an unpaid public-spirited volunteer released onto the street in police uniform with only the most rudimentary training? What in the system allows this sort of thing to happen?

Why was there not better supervision on the street? Is this because the numbers of experienced officers are falling as they haemorrhage out of the force due to poor pay and conditions and their disillusionment at the continual, and often politically-correct, criticism? Why was there not a sergeant overseeing operations, if this was a set piece stop and search operation? Was it because after the cuts there are simply not enough of them anymore to give guidance?

If any of this is the case it tells us that the 20,000 new officers the prime minister wants are not going to stop this sort of dreadful incident happening. Experience is vital to be safe and effective on the street as a police officer.

Might he have been released from his handcuffs or slipped out of them? Is the fact that the suspect was not adequately dealt with and prevented from reaching a gun telling us something more insidious?

Has the recent media furore and criticism of the police treatment of ethnic minorities by the ‘woke’ and Black Lives Matter activists changed police behaviour to the point that they are scared of doing everything to ensure the safety of the suspect, public and themselves, lest they face a complaints investigation for their actions?

Worse, is the Covid outbreak a factor in the death of the unfortunate and long-serving sergeant? Normally, custody sergeants sit behind their computer at a desk screened off from the suspects as they book them in. They are safe from attack and understandably do not wear body armour.

Has a change in booking-in procedures occurred due to Covid, requiring the sergeant to leave his or her desk to speak to suspects in isolation away from their protected screen in order to ask various Covid related questions, placing the officer in a vulnerable position?

Who would think to put on body armour to enquire into the medical welfare of a suspect when you are working in what is effectively your own office area?

Clearly, this aspect of Covid risk management has not been properly risk assessed, otherwise there would have been a direction that this new booking-in procedure should be carried out by officers in body armour.

Whatever the facts are, all our officers need to know the answers fast for their protection.

If it transpires one of the reasons the suspect was not adequately dealt with was due to increasing police wariness after criticism by the media and apprehension about not being supported by their leaders, this needs to change and change fast.

Like it or not, our police have a right to be kept as safe as possible when protecting us. If this means all persons arrested are as restrained as needs be as a blanket policy decision, then this needs to happen immediately.

Perhaps if some senior officers spent less time on appeasement and taking the knee to groups like Black Lives Matter and being ‘woke’, and more time on thinking through procedures to keep their staff safe from imaginable contingencies, this sort of thing might not happen again.

Editor’s note: The original version of this article was written before it became officially evident that the suspect had been in handcuffs after being arrested. It has since been amended to reflect this fact. 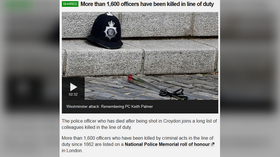