Although Moscow’s calls to discuss close encounters with the US and its NATO bloc have fallen on deaf ears, it will train troops to make sure these frequent mid-air incidents don’t get out of hand, a top Russian general has said. 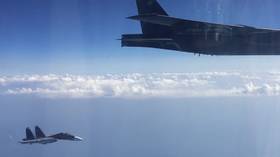 Russian armed forces have registered “almost 30 NATO strategic aircraft quite close to our borders” over the last month, Valery Gerasimov, chief of the Russian military’s General Staff, said during a sit-down interview with RT. Those sorties, involving reconnaissance airplanes, have happened over the Black and Baltic seas, the Arctic Ocean and to the east of Russia, General Gerasimov revealed, adding, “We are wary of these frequent US/NATO air missions close to our borders.”

Moscow has been tirelessly trying to raise the issue of close-call encounters in the air and at sea with top US and NATO military brass, asking them “to improve the current agreements on the prevention of dangerous military activities.”

“The thing is that we already have such agreements, we’ve signed them,” Gerasimov clarified. However, some details – namely approach intervals, safe approach distances for aircraft and ships, and operational procedures – were neglected, and the overall endeavor to decrease tension was overlooked.

No one has given us a response. So we can see that NATO and American military commanders are OK with this situation.

The Russian Air Force scrambled fighters at least twice earlier this month to intercept NATO warplanes approaching Russia’s airspace. On one occasion over the Baltic Sea, Su-27 Flanker jets shadowed a US Air Force RC-125 reconnaissance plane and a Swedish Gulfstream designed for the same type of missions.

On another occasion, three nuclear-capable B-52 strategic bombers triggered a major alert in the Black Sea area, to which the Russian military responded by sending in four Su-27s and four Su-30s.

The US European Command hailed the mission which, as they put it, demonstrated the US and NATO’s ability to “deter Russia and assure allies and partners.” Russia “is not OK” with what is unfolding, Gerasimov stressed.

We don’t want any incidents that can spiral into a military conflict. That’s why our pilots and ship captains are retrained in their actions and abide by all international legal agreements.

Such training, apparently intended to enhance troops’ confidence in dealing with uneasy situations, involves “combat units of both Air Defense and the Air Force, as well as flight operations control room staff,” the general revealed.

Whatever the odds of dealing with NATO, Russia is still committed to be as open and transparent as the moment allows, Gerasimov continued, citing the current Caucasus 2020 military exercise as the closest example. Roughly 80,000 Russian personnel have been honing their combat skills in the south of Russia, alongside some 1,000 troops from China, Armenia, Belarus, Myanmar and Pakistan.

Moscow has briefed foreign defense attaches on “all the objectives, goals, teams and the schedule,” inviting them to watch the exercises; the Organization for Security and Cooperation in Europe, the US and other NATO states were also notified.

“How much more open can it get? We do not see reciprocal actions by the United States and their NATO allies, however,” the chief of General Staff lamented. In contrast to Russia’s openness, NATO prefers to keep Russian observers in the dark, posting “a very brief announcement with a date and location, and nothing else.” Here, “we provide all the details openly, while they don’t. We can draw our conclusions,” Gerasimov concluded. 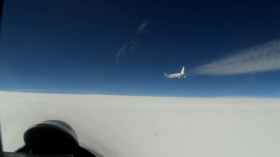