The Early Years Alliance said the crisis was caused by the government’s “chronic under-investment” in the industry. 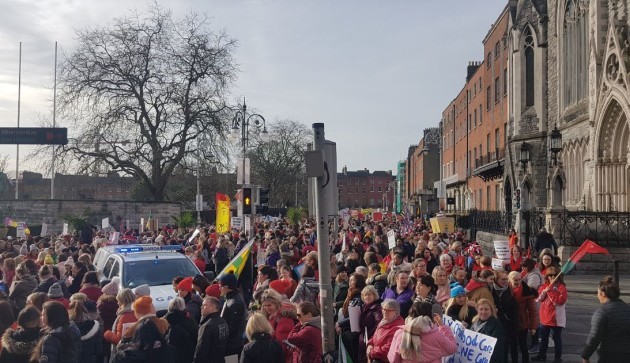 A MAJOR PROTEST in support of childcare workers is taking place in Dublin today, calling for more support from the government for the sector.

Most are calling for childcare to be made a public service rather than a private one, as it doesn’t pay for regular hours or every week of the year.

One sign said “paid for 38 weeks, paying bills for 52 weeks”; another said “we love our jobs, but loves doesn’t pay the bills”.

Another said “we work in childcare but can’t afford childcare for our own children.”

The demonstration in Dublin started at 11.30am at Parnell Square, and has marched across the city to Merrion Square. Those taking part in the protest had been encouraged to wear red hats, jackets, or t-shirts.

Childcare workers have said that their pay is too low, that there aren’t enough providers, and that insurance costs are too high. In December, creches were left in the lurch after major insurers left the Irish market, unexpectedly hiking up prices.

The Minister for Children and Youth Affairs Katherine Zappone gave creches a once-off payment of up to €1,500 to keep creches open in 2020, costing a total of €7 million. This was after a major insurer offering cover to creches left the market.

The minister had told a committee previously that the average creche is facing a 100% increase in their insurance premium as a result of having to move to insurance company.

Trade union Siptu has begun its ‘Big Start‘ campaign as a result, which is asking both childcare providers and parents to support.

These groups are asking that they’re paid a decent wage and that the sector is made more sustainable – so that the industry doesn’t collapse if and when a private company pulls out of the Irish market.

Among the claims that the Early Years Alliance has made is that most of their educators earn less than €12 per hour; and many more earn slightly more than the minimum wage.

The group also says that most childcare workers don’t have access to a pension, sick pay, or maternity pay. They are also subjected to insecure contracts, it says.

“Lack of affordability, low pay and precariousness, and a growing labour shortage: the crisis in Early Years is caused by the government’s chronic under-investment in the early years’ sector,” it said.

Hundreds of childcare facilities closed across the country as a result of today’s protest, just a day after a protest carried out by secondary school teachers represented by the TUI.