From Kamchatka in the east to St. Petersburg and Kaliningrad in the west, the Russian Navy put the finest of its sea power on display, with warships sailing by and naval assaults played out in front of onlookers.

Founded and nurtured by the reformist Tsar Peter I the Great at the end of the 17th-century, the Russian military’s naval arm marks its professional holiday this Sunday. Festivities were held across the Northern, Baltic, Pacific and Black Sea fleets plus the Caspian flotilla, but the focus of the celebrations was St. Petersburg, the cradle of the Russian Navy’s traditions.

As many as 46 surface ships and submarines lined up on the Neva River days beforehand, with Russia’s frigate ‘Admiral Kasatonov’ being the largest and by far the most advanced star of the Navy Day show. 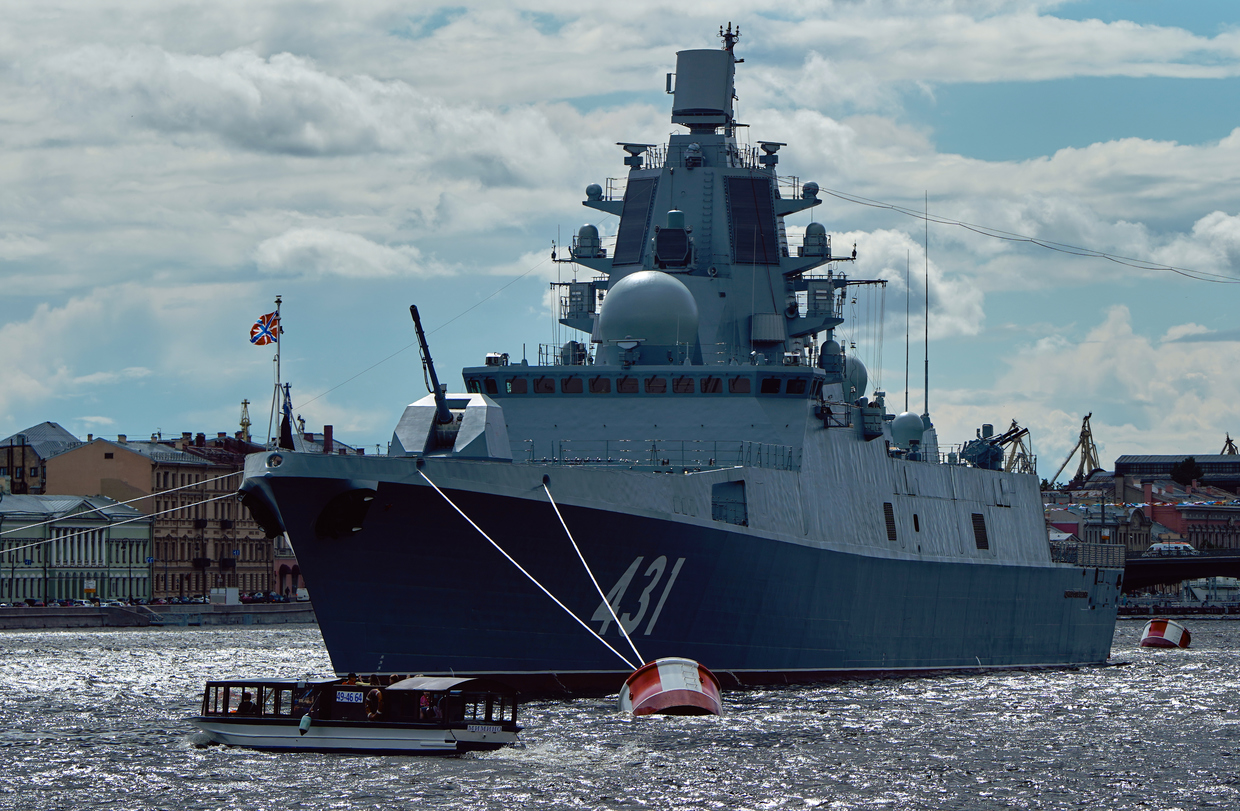 Also stealing the limelight was ‘Poltava,’ a replica of the Russian Navy’s first battleship launched in St. Petersburg in the 1710s. The sailing ship was put on display in an apparent nod to Peter the Great’s naval victories. 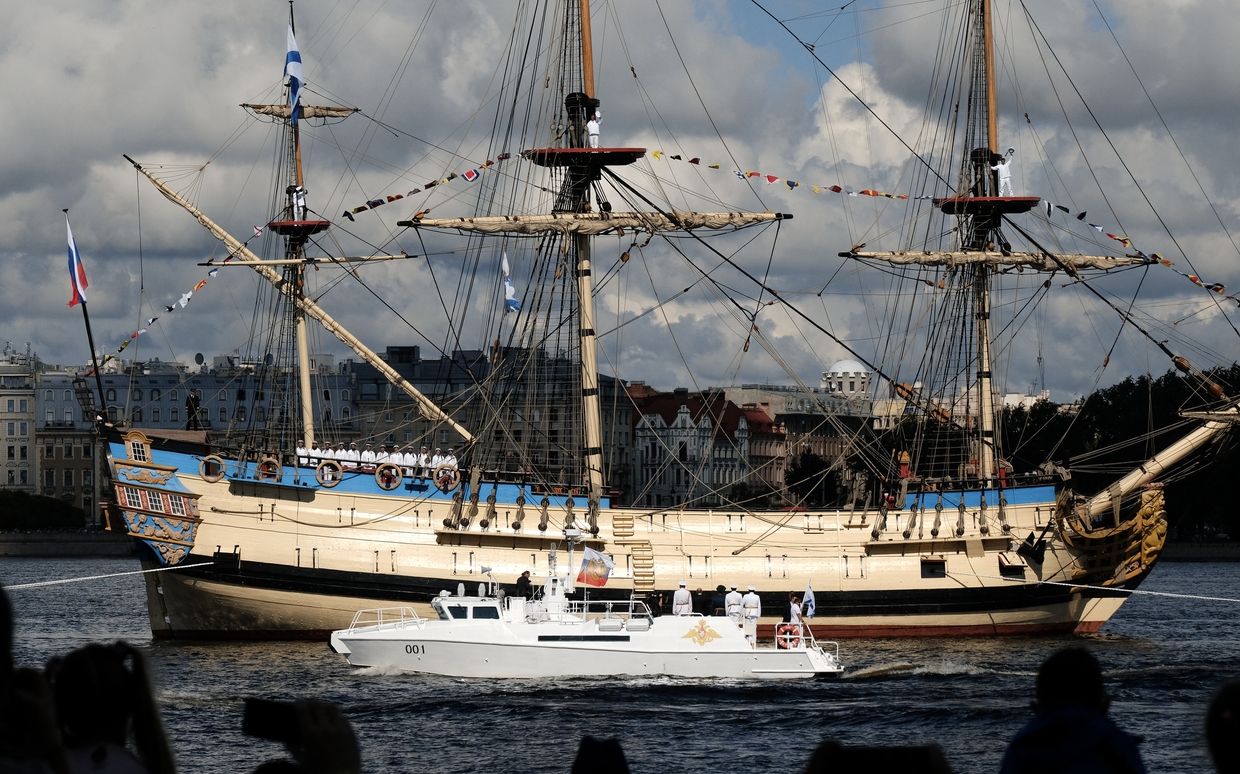 In the skies above Russia’s historical capital, dozens of Navy aircraft made a spectacular flyby. Meanwhile on land, more than 4,000 sailors – dressed in ceremonial uniforms – marched through the city’s Palace Square, right in front of numerous spectators, among them President Vladimir Putin.

A traditional VIP guest at St. Petersburg’s Navy Day parades, the commander-in-chief made a powerful appeal to troops and the public, hailing the navy’s history and pledging to beef up its might.

An increase in the navy’s combat capabilities will be achieved through the widespread introduction of advanced digital technologies that have no match in the world, of hypersonic strike systems, unmanned underwater vehicles, and the most effective means of defense.

The Northern Fleet showcased the best of its submarine force. ‘Count Vladimir’ and ‘Novomoskovsk,’ the nuclear-powered, ballistic missile-armed subs, took part in the parade, along with the fleet’s flagship ‘Pyotr Velikiy’ – one of the largest battleships in the world.

Russia’s Pacific Fleet was the first to start Navy Day celebrations on the opposite side of the country, thanks to the time difference. Ships traversed the spectacular Golden Horn Bay in the Sea of Japan, garnering cheers from onlookers that flooded Vladivostok’s embankments.

In a separate twist, the show featured a mock amphibious assault by naval infantry, who used BTR-82A floating armored vehicles, speedboats, and landing craft to “capture” the shore. 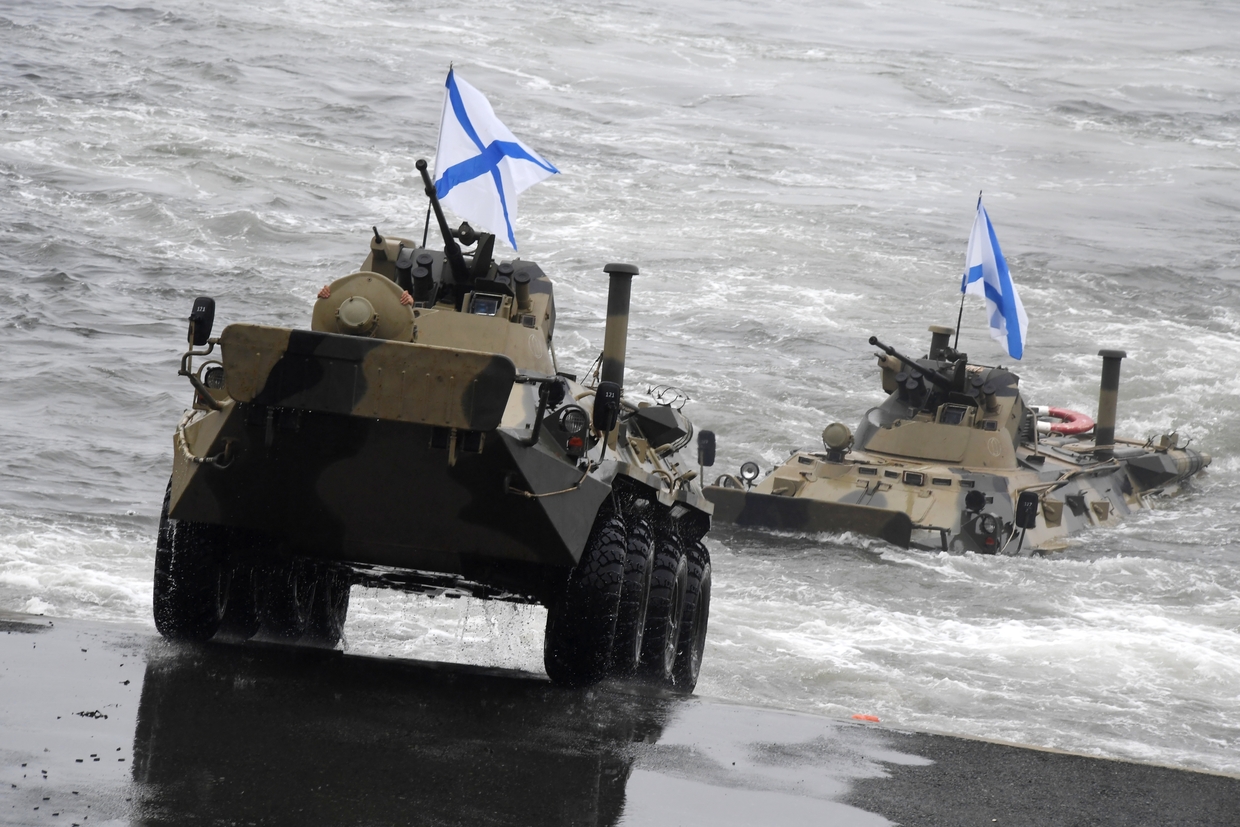 A smaller-size parade has been held in Sevastopol in Crimea, the historic hub of the Black Sea Fleet. It was given a major boost in recent years, with a number of cruise missile-armed frigates, corvettes and diesel submarines joining the force. 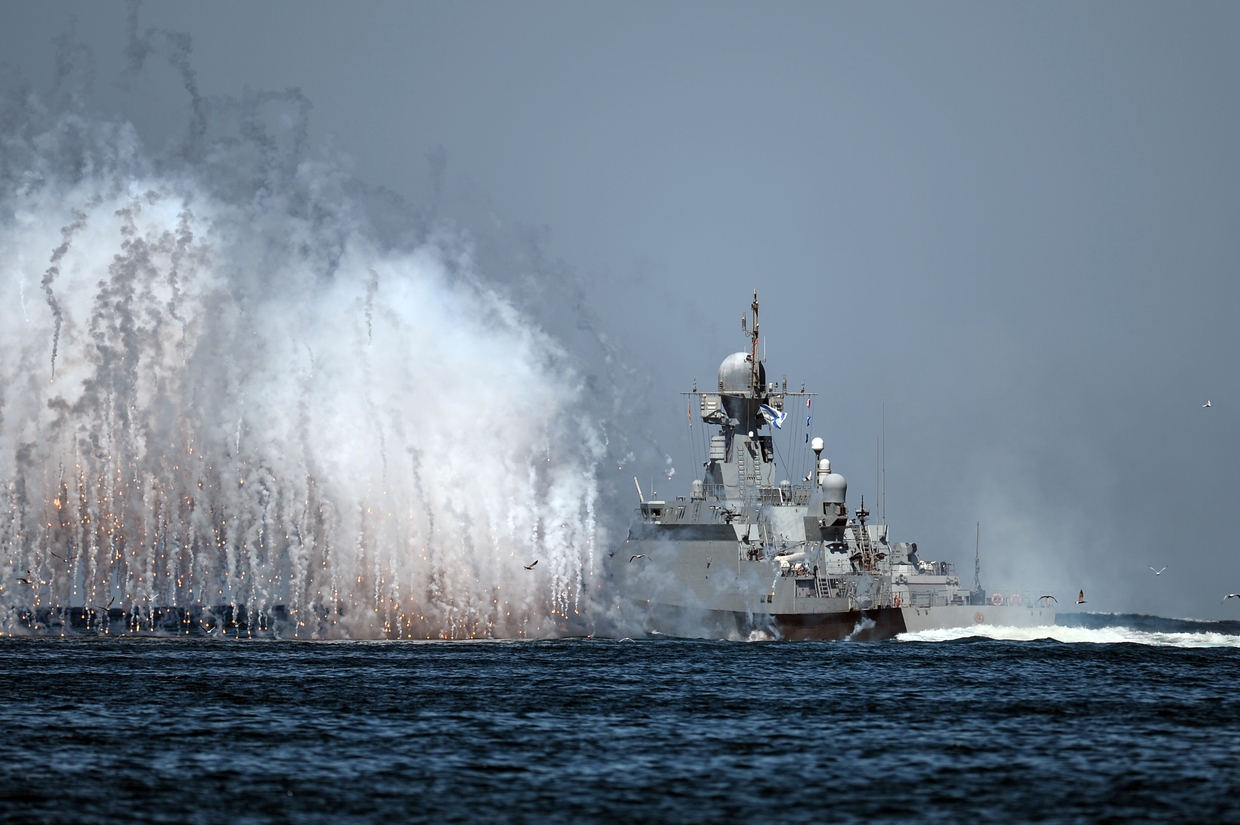 Crimea is where Russia’s first amphibious landing ships were recently laid down. The Russian Navy was to take delivery of the French-built Mistral-class ships several years ago, but the multibillion-dollar deal was shot down by Western sanctions imposed over Crimea’s unification with mainland Russia in 2014.

The slew of naval parades comes as Moscow seeks to strengthen the Navy’s blue-water capacity. Some 37 brand new warships will be delivered to the Russian Navy this year alone, Defense Ministry officials announced; six more oceanic-class frigates have already been launched.