The Western media has made Wednesday’s vote on Russia’s Constitution about one issue: Giving President Vladimir Putin the option to ‘rule’ until 2036. However, those who understand Russia better take a more nuanced view. 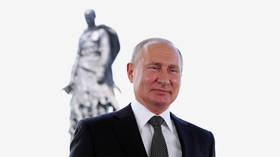 Veteran TV presenter Vladimir Pozner is known to older English-speaking audiences for his 1980s and 90s collaborations with Ted Koppel and Phil Donahue. A liberal, he has always made it clear that he does not support Putin. This week, he interviewed the head of the Central Election Commission of the Russian Federation (CEC), Ella Pamfilova, who was closely associated with the West-leaning, liberal Moscow opposition before taking up her current role.

Neither believes that the main goal of adopting amendments to the Constitution is to reset Putin’s presidential clock to zero. This proposal, the most often cited in the West, would potentially allow the incumbent another 16 years in the Kremlin, by effectively canceling the clock on his previous stints.

“I agree with you that this is not why Mr. Putin proposed these amendments,” Pamfilova replied.

“He did not have to do this, even these amendments, they have already been adopted [by Russia’s legislature and regions],” Pamfilova said. “[So] I don’t think so, I don’t feel it [was the main reason].”

The journalist said he was actually more upset about the manner in which Russians were informed of the “zeroing” of the count. “I would say the way [the information was reported]showed no respect for my thinking apparatus” – referring to the manner in which United Russia MP Valentina Tereshkova, famous for being the first woman in space, introduced the measure during a parliamentary sitting in March.

Pamfilova also admitted she wants to leave her post, which has made her a controversial figure with former liberal allies “a thousand times.” However, Pamfilova clarified that it wasn’t because of concerns about her performance in the role.

“For four years of my work as head of the CEC, I have never felt ashamed of anything… I never asked my colleagues or employees to betray their conscience,” she said. “I never allowed neither myself nor my colleagues to go against the law.”

The national vote on amendments to the Russian Constitution concludes on Wednesday.