A new study from America indicates that people were falling ill with coronavirus-like symptoms in December 2019, but doctors at the time dismissed it as ordinary flu. 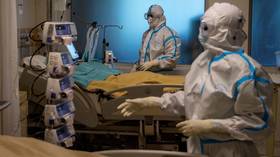 A team of doctors from Los Angeles scouring the hospital records from last winter has discovered a series of smoking gun clues which almost guarantee that Covid-19 was present in America well before Christmas.

Scientists from UCLA have been analysing over 10 million hospital records from December 1, 2019 to February 29, 2020. Comparing that winter to previous ones, they noticed a 50-percent increase in ‘coughing’ as a symptom on admission forms. In addition, 18 more people than would ordinarily be expected were hospitalised with acute respiratory failure.

In fact, the scientists estimate that there may have been 1,000 or more Covid sufferers in LA alone last winter – and presumably those are just the symptomatic minority. At the time, of course, all of this was put down to a moderately bad flu season. Officially, Covid did not turn up in LA until January 22, when a traveller in LAX airport fell ill. He was from Wuhan, and was identified as Covid-positive four days later.

This bombshell fits an emerging body of evidence on an earlier coronavirus timeline. Many people may remember the reports of a strange vaping-related illness that ravaged Americans towards the end of last year. There was a good deal of study on it. Scientists at first thought it was the oils in the e-cigs congealing in people’s lungs, but soon debunked that hypothesis. In hindsight, it is difficult to look past Covid as the real culprit. Pneumonia-like symptoms, ordinarily fit people falling severely ill… it was Covid all over.

These revelations come hot on the heels of a very different story from England, which nonetheless points to the same conclusion. Peter Attwood died at the age of 84 on January 30, having been sick for over a month. But in recent weeks, an autopsy has confirmed that he died of Covid, which he probably was infected with in 2019. Underlining this, Attwood’s daughter was sick with similar symptoms two weeks earlier still.

All of this happened in Kent, England. But according to the government there, the first Covid death in the UK did not happen until March. Now, Attwood’s family want answers from the Chinese government on why they did not tell the WHO earlier about the coronavirus, which we know from leaked memos was identified in mid-November at the latest.

If coronavirus burned a track through the US and the UK towards the end of last year, is there any reason to suspect it wasn’t doing the same everywhere else? In July, reports came in of coronavirus DNA being found in Spain, Italy and South America as long ago as the spring of 2019. How far back does this story go? We will probably never know.

Nor will we ever be able to track the precise journey of the novel coronavirus around the globe, despite being nearly certain of its origin in Wuhan. But when the inquiry is done, surely findings like these have to be taken seriously, and built into the retrospective model of the pandemic. And if the coronavirus was spreading freely in 2019, the questions are: What was the point in beginning lockdowns in March this year? Is it really credible that they could have made a blind bit of difference, coming as late as they did?

This whole mess demonstrates the problem with relying on official data and records, as they are bound to be incomplete and tardy, particularly at this stage. Despite such understandable failings in government information, people have an unfortunate habit of treating it like the gospel truth. This is absurd, and yet thinking of this quality seems to inform so much coronavirus policy.