The Germans have not torn down all of their concentration camps. Americans shouldn’t be pulling down the reminders of our slave past. It’s important to understand our past, in order to not repeat it. 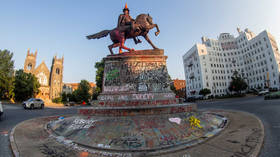 When I see these statues, I see history. I’m glad those issues of the past were settled, and nobody in the United States advocates slavery – and if they did, they would be publicly destroyed to where they wouldn’t be anything other than homeless bums on the street. Slavery still exists in some forms in other countries, but not here.

Radicals in the US today remind me of the Salem witch hunts. Some go around, eyes bulging, looking for slavers who disappeared 150 years ago. The statues are, for the majority, just history.

History is a good thing, and it is important to remember even our most painful episodes. Germany and Poland haven’t destroyed all the remnants of the Nazi concentration camps. Some of them are still there today and you can visit them. They are preserved for history. They are not glorified – it is history, and deserves to be remembered.

Apparently, those opposed to American Civil War monuments do not realize why the North allowed them to stand. President Abraham Lincoln said that he wanted to reunify the nation and to bring no punishment to the South. It was an acceptance of the Southern culture minus slavery. Most do not know that at the death of Confederate veterans, their families got the same monetary benefits as the North. This is a fact, not a myth.

The Confederate statues aren’t only about racial issues. In 1895, The United Daughters of the Confederacy erected a monument in Anderson, Georgia, to memorialize the commandant of a concentration camp officially known as Camp Sumter, but known to history as Andersonville. Captain Henry Wirz was convicted of war crimes for his overseeing the torture, beatings, and starvation to death of 13,000 Union soldiers. He was hung on November 10, 1865, as a war criminal.

This is not about racism, slavery, or anything other than destroying our history and carrying out random acts of anarchy. The more these mobs are allowed to get away with, the more it will happen, and the longer it will go on.

These anarchists want this to continue until the November election as a ploy to defeat President Donald Trump. Let’s say Trump was to federalize the National Guard nationwide and utilize them to stop the riots and destruction; they would demonize him back to the stone age. Yet, Barack Obama used the National Guard to quell riots and was lauded for it. This is all about the Democrats’ quest for ultimate power and control over our lives.

A mob should not make the rules, ever. I’m tired of politicians who placate the mobs as well. I can easily find fault with any person who ever had a statue put up for them in public – but that doesn’t mean they should be removed.

The underlying cause of all this anarchy is clear. Socialists have invaded our academia, and a blind eye has been turned to it. The Democratic Party of 20 years ago is vanishing right before our eyes. When schools re-write history to socialist values, this is the result. People only know what they are taught or what they live through. No one here has lived through the agony of a socialist government, except the people that have moved here to flee one. So all that native-born Americans can go by is what they are taught.

People need to stop voting for the “Republican” name and the “Democrat” name, because the Democrats have been taken over. They need to talk to people that have fled socialist countries, as what is going on in the US is step-by-step what socialists have done for the last 100 years, and you should not be afraid to confront it and reject it, because if you don’t, you will get socialism.

Those who do not know history are doomed to repeat past mistakes. Should the concentration camps be destroyed and be turned into game parks instead? No! We need to be reminded of the evil forces and not fall again.

If 200 years ago, something was lawful, who are we to judge them with the standards of today? We are to fight for change!

Hence, don’t erase history, don’t destroy its worst remnants, just remove them from prominence, make Hallways of History and teach the new generations what shame is. Without the explorers, discoverers, invaders, armies, and all the good deeds, and all the atrocities, we wouldn’t be where we are. And we have progressed. Just work on doing it better and faster.

The demand to have statues & paintings of ‘White Jesus’ torn down has made BLM an Iconoclast movement, not just a Marxist one

Our job is to make a better world with the time given to us based on what we have learned from the past. Mourn and honor the dead, the abused and the unjust, then learn, teach and spread their legacy. Otherwise, all these abuses will restart again, like slavery though sex, neo-Nazism, autocracy, oligarchy, and so on.

The media doesn’t realize how bad this makes collective ownership (socialism) look. A small mob taking control of something we all own, and doing whatever they want, including destroying it, causes people to favor private ownership.

History is a teacher. Tell your children about it. Explain what happened. When you see these statues and art explain, it’s here for us to know how and where these events changed our country. Stop the witch hunts. The statues are a reminder to all people.

Some of those people should feel how fortunate it is that slavery no longer exists in the US. That society has changed, evolved, fought against slavery, made huge strides blending our races. No one in the US is a slave, except the ones choosing to live on a political plantation.

In summary, do not judge the past with the values of the present, use history to promote change, and as for these controversial statues my wish is to leave them alone but if things have to be done to calm the savage beast, remove them with dignity and set up museum parks for remembrance. 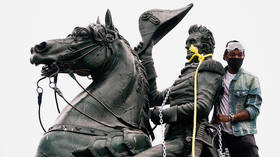 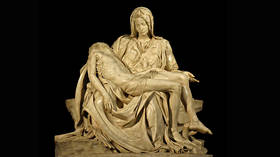