There has been concern from the start about ‘standardising’ Leaving Cert grades – this has been somewhat vindicated this week.

WHEN PLAN C for this year’s Leaving Cert was announced, people had concerns that the system would be unfair for students.

It would mean that students wouldn’t be sitting the exams they had been preparing for for almost two years. Instead, they will be assessed by their teachers, coupled with a controversial ‘standardisation’ by the Department of Education.

The system was indeed labelled by some critics as “unfair”, and “school profiling”.

But reassurances were given by the then-Education Minister Joe McHugh that the system would be fair, and that the government had been forced into this position due to the Covid-19 pandemic, making in-person State exams almost impossible to hold.

Now that we have seen versions of this system play out in Scotland and the rest of the UK, those concerns have come to the fore again.

With the Leaving Cert results due to be issued to students on 7 September, all eyes will be on the UK’s experience to indicate what students’ experience could potentially be here.

What was the plan C for Ireland?

Plan A for the Leaving Cert was to hold the exams as they would be any other year, and Plan B was to partially hold in-person exams, which would mean cutting down on the exam papers, exam times, and the amount of words students were to write for essays.

But the Irish government ultimately opted for Plan C: there would be no exams, and no more work, either practical or otherwise, would be done by students.

Instead, teachers would assess the work done by students to date: this could include Mock results, Christmas exams, practical work, essays, and fifth-year work.

Teachers can also take into account the progress made by students to date, and factor that into their calculation of what grade students would have received in a Leaving Cert exam. Teachers will also rank the students in order of how likely they are to receive a high grade.

This grading system would be crosschecked with teachers of the same subject, and then referred to the principal to sign off on. The principal has been labelled by the Department of Education as an important part of the process – if they have concerns about a student’s grades, they will confer with the teachers of that subject about the reasoning behind it.

The grade then goes to the Department of Education for ‘standardisation’, where the teachers’ calculated grades are cross-checked against previous years’ State exam results, and that Leaving Cert year’s Junior Cert results.

So what went wrong for Scotland and England?

On Tuesday, Scotland issued students with their Calculated Grade results. This was based on a mix of teacher assessment, and “national moderation” by the Scottish Qualifications Authority (SQA) – so a similar approach to Ireland’s.

What garnered the most controversy is that pupils from the most deprived areas of Scotland had their grades reduced by an average of 15.2% – this compares with 6.9% in the most affluent parts of the country.

Although there was a similar problem with the Calculated Grades released in England, there isn’t as big a disparity between schools in affluent areas and schools in disadvantaged areas in England as there is in Scotland.

It’s still not clear what effect the Calculated Grade system will have on placements at third-level institutions; the results across England, Northern Ireland and Wales saw record numbers of top-end grades.

Did Scotland and England have the same plan as Ireland?

Mostly, but not entirely. Up until Wednesday, the day after Scotland’s results were announced, there was no option for students in England to appeal the Calculated Grades they received, or to sit their written exams if they wanted.

On Wednesday, the British government announced that students could use Mock exam results as a basis for an appeal of their final calculated grade.

GSCE and A-level students can sit an exam in the autumn if they are unhappy with the grades they are given. 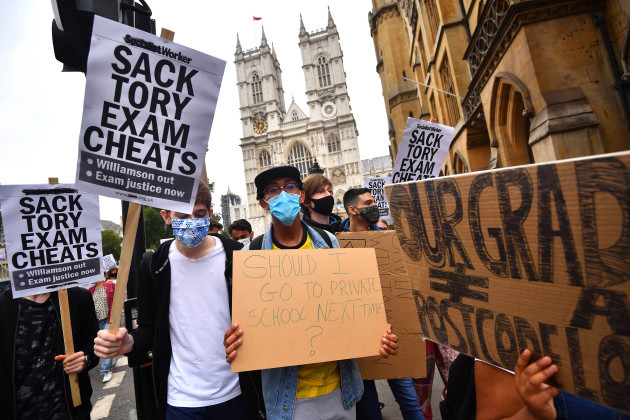 The Irish government seems to have already foreseen this problem, and had a multi-layered appeals process in place from the beginning.

The first part of the appeals process is limited – it is purely a review to check that all data was inputted correctly and won’t involve the teacher reassessing the grade.

This is because the act of the Department of Education asking a teacher to reassess a mark would be tantamount to asking them to increase it.

After an appeal, if students are still unhappy with their calculated grade, they can take a written exam – a date for which has yet to be decided. This will take place after the upcoming academic year has begun, meaning they will have to wait until next year to go to third-level if they wish to appeal in this way.

If students are unhappy with the result of their written exam, they can choose to stick with the calculated grade. They need not sit a written exam in all subjects, and can choose the exams they wish to appeal.

The Department of Education confirmed to TheJournal.ie that students would be able to view their Calculated Grade broken down into the teacher-assessed grade and ranking.

“On Monday 14 September the student portal will open for appeal applications and at that time all students will be able to see a record of their individual estimated percentage mark and ranking assigned to them by their school.

“This provides full transparency over the process and will also assist students who are unhappy with their calculated grade in making a decision as to whether or not to appeal their grades.”

Where things could go wrong

There have been a number of concerns raised about this process.

One of the first came from the former Education Minister Joe McHugh, who previously raised concerns about whether a ‘teacher grade’ would be fair.

“One of the things we talked at length about was the professional judgement of teachers,” McHugh said, which “is central to this”. That is why the teachers’ code of trust and fairness, as well as oversight from the principal, and the standardisation process, was important in settling on this Plan C as the course of action.

The second concern came from a number of teachers, who said that they had been contacted by both students and parents in an alleged attempt at lobbying ahead of their assessment of students.

The main teachers union for secondary school teachers, the ASTI, said that this was “unacceptable” and “completely inappropriate”. Teachers were urged to report any incidents of lobbying to the Department. 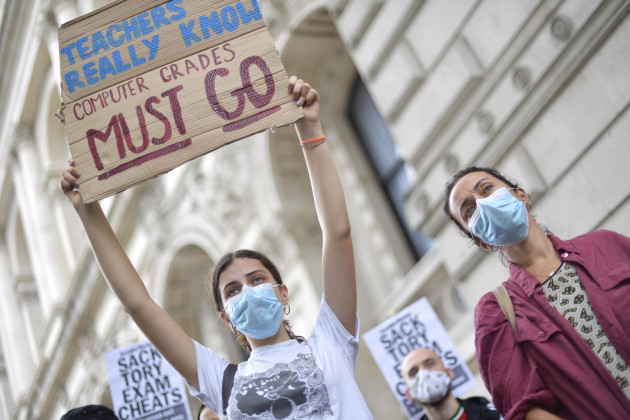 The Department of Education has stressed that teacher assessments, and the progress of students between Junior Cert, fifth class, and their current standard, will be an important influence on students’ final Calculated Grades.

However, this is a new process, and teachers have no experience in assessing their students in this way.

Speaking to TheJournal.ie, Labour’s education spokesperson Aodhán Ó Ríordáin said that they are hoping that the standardisation process does work – but he isn’t hopeful.

“There’s a number of equalisation processes being used by the Department, one is based on gender, so for example, if girls outperform boys in a certain subject every year, and it’s a common theme. It’s hard to argue with that analysis.”

“But the other is school profiling, which is based on the history of the school,” Ó Ríordáin said.

“Around 20 years ago, I remember being a substitute second-level teacher, and I remember walking past a classroom, and there was a student by herself, and I asked her why she was in there by herself. And she said she does Honours Maths by herself because there is no Higher-Level Maths teacher in the school.

“A lot of people would assume students have access to a Higher-Level Maths teacher, and wouldn’t take account of her situation. We can’t assume hers is an unusual one,” he said, and urged the current Education Minister Norma Foley to drop the school profiling element of the standardisation.

It takes a huge effort to do Higher-Level Maths, English or Irish, and then you are going to be judged by the history of your school over all.

Ó Ríordáin also claimed that there isn’t a proper appeals process, either, and said that students from disadvantaged areas and backgrounds wouldn’t have the same access to mainstream media to voice their unhappiness with the current grading system.

The Leaving Cert puts a ridiculous amount of stress on students, but the very least you can do is step into exam hall and they haven’t a clue who you are – whether you’re male or female, working class or fee paying. That anonymity is gone in terms of the grading process.

The Labour Party was against cancelling the Leaving Cert written exam on the basis that a fair alternative couldn’t be found, but Ó Ríordáin said that he understood the decision.

“We want to be wrong, we all want the minister to stand up on 7 September and say all this rhetoric was based on nothing, and this is a fair assessment of what students’ abilities are.”

“How could Junior Certificate results have told us that class would perform so well?”

It’s not entirely clear that a similar problem to that in Scotland and England won’t happen here – and would depend on the reaction of students and teachers to the standardisation process, particularly when the results in schools based in affluent areas are compared with DEIS schools.

The appeals process that has been in place since this Plan C was first announced may safeguard against the furore that erupted in the UK this week.

An ASTI spokesperson told TheJournal.ie that it recognises that the emergency Calculated Grades for the Leaving Cert 2020 process has been “necessary” in order to allow Leaving Cert students to progress to the next stage of their lives.

“This has been an extraordinarily challenging year for our Leaving Cert Students. The postponement of the Leaving Certificate exams and the implementation of contingency arrangements has been far from ideal. Teachers undertook their part in the process in good faith in the context of the pandemic and we await the outcome,” it said.