The English Department at Rutgers University said it would ‘stand with’ BLM by focusing on ‘racism in the classroom,’ evidenced by the emphasis on grammar. Will colleges prove more destructive than the riots just witnessed? 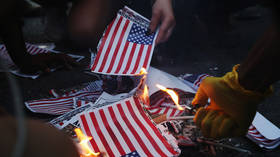 It appears that the fallout from the BLM and Antifa riots following the death of George Floyd at the hands of a white cop were not only the torched and looted city center of Minneapolis and Saint Paul. Today, the ‘violence’ continues to spread like wildfire from the manicured lawns of one of America’s oldest colleges.

Last month, in an effort to demonstrate camaraderie with the BLM/Antifa movement, Rebecca Walkowitz, Chair of the English Department at Rutgers, sent a 3,000+ word email to her colleagues that addresses, among other things, “racism in the classroom.” Never mind that no proof is provided that such a thing even exists. In addition to mentioning compulsory workshops for faculty and students “who do not live the experience of anti-black racism every day,” as well as new hiring standards that give advantage to “people of color,” the email touched upon a part of the English language that one would not normally associate with “systemic racism.”

Under the heading entitled ‘Incorporating critical grammar into our pedagogy,’ Walkowitz said writing instruction “should limit emphasis on grammar/sentence-level issues so as to not put students from multilingual, non-standard ‘academic’ English backgrounds at a disadvantage.”

“Instead, it encourages students to develop a critical awareness of the variety of choices available to them w/ regard to micro-level issues in order to empower them and equip them to push against biases based on ‘written’ accents,” the professor continued.

In other words, students whose first language is not English, or who come from “non-standard ‘academic English backgrounds” (i.e. Black Americans) should not be unduly ‘punished’ in the classroom for their sub-par writing skills. Instead, they should fall back on a “variety of choices” that empowers them despite their shoddy grammar and writing skills. The part where Walkowitz mentions the “biases based on ‘written’ accents” suggests that those “biases” are the failing grades, while the “written accents” is a polite euphemism for ‘mistakes,’ which, in these days of political correctness, nobody is allowed to make. Actually, they are free to make mistakes; it’s just that nobody, not even the teacher, is permitted to draw attention to them.

The not-so-subtle argument being pushed is that since English is not the original lingua franca of Black Americans, and other minorities, who have a different native origin and therefore different comprehension of such nuances and should not be expected to suffer. Their grammatical and writing errors are more the fault of the historic colonizer, the dreaded White man, as opposed to their own failings to grasp the rules of the English language.

For anyone who thinks that may be reading too much into the message, Walkowitz’s email specifically mentions the creation of workshops that focus on “diversity and equity” in an effort to make the Rutgers writing programs “linguistically diverse and decolonized spaces.” There is only one way to interpret that line – sheer madness.

First, ‘linguistics’ is defined as “the scientific study of language and its structure, including the study of grammar, syntax, and phonetics.” Unless Walkowitz is talking about the comparative study of many diverse languages, which she is not, there can be no ‘diversity in linguistics.’ As is the case with every language, indeed, with every science, English follows certain rules that cannot be broken lest we want our written and spoken form of communication to be totally incomprehensible. There can be no divergence from the rules of English any more than there can be a divergence from the rules of baseball.

Second, the term “decolonized spaces” suggests that the English language itself is somehow predicated on racism, which of course is utterly ridiculous. At a minimum, such an unfounded assertion may incite actual racism where before there was none; at the worst, arguing in favor of “decolonized spaces” risks altering the English language beyond comprehension since its grammar rules are allegedly symbols of racism. Ironically, such an argument could actually increase the level of misunderstanding between the races if there is no unified form of communication. Instead of two diverse peoples enjoying the unifying power of language to express their ideas, America will be confronted by two diverse groups unable to understand what the other is saying.

While such a brilliant idea may work fine inside of the increasingly disconnected college campus, it will flop dismally in a place called ‘the real world.’ Minority and multilingual students may feel ‘empowered’ inside of the classroom when they receive praise for lackluster work, but in the marketplace their products will find no buyers and their expensive education will have been for naught.

The social justice warriors are actually peddling their own form of racism by arguing that minority students somehow lack the intellectual ability to adhere to the rule of English grammar. That is wrong, as many famous Black writers – like Toni Morrison, James Baldwin and Alice Walker – attest to. To paraphrase William Shakespeare, the famous British bard, “Thou protest too much.”

*Rutgers has not officially stated its endorsement of the measures put forward in the email.