A gas leak caused a huge blast and fire at a medical clinic in northern Tehran, leaving more than a dozen people dead and several others injured, Iranian officials have said. 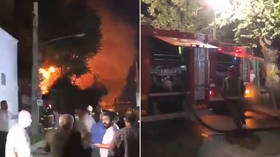 Iran’s ISNA news agency was among the first to publish footage of clouds of black smoke above the city. Other videos posted to social media, which purported to have captured the incident, showed intense flames and a descending whirl of sparks.

#BreakingNews Footage allegedly shows an explosion somewhere close to Tajrish square, north of #Tehran#Iran. The cause of the explosion is still unknown. pic.twitter.com/ejiG0ZOLNi

The emergency services later said the blast rocked Sina Athar Medical Clinic, not far from Tajrish Square, one of the busiest areas of the capital. It was likely caused by the explosion of a gas cylinder used to store liquefied gas for medical purposes.

Another view from tonight’s #explosion in the north #Iran|ian capital #Tehranpic.twitter.com/I30msUJLjB

At least 19 people – 15 men and 4 women – were killed in the incident, the emergency services confirmed, according to KhabarOnline website.

Iranian authorities also warned curious onlookers from gathering outside the burning clinic due to the danger posed to them by the fire and the Covid-19 pandemic. Iran has been heavily hit by the coronavirus, with more than 225,000 confirmed cases and almost 10,700 fatalities.

Last week, a blast took place near a military site outside Tehran, with the Defense Ministry saying it was caused by a leak at a gas storage facility.