Israeli helicopters have attacked multiple Syrian Army positions in southern Syria, in retaliation to several projectiles fired towards the Golan Heights. At least two people were injured in the strikes. 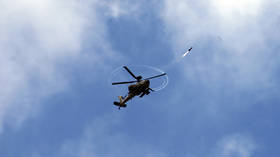 The strikes targeted a number of observation posts late on Friday night, the IDF has confirmed, noting it had struck “intelligence gathering means” of the Syrian military. The attack hit three outposts located in Quneitra around 11pm local time and left two people injured with “minor wounds,” the Syrian Defense Ministry said.

From the scene of the strike in Syria this evening. pic.twitter.com/KuyO3846r8

Footage purporting to show the aftermath of one of the strikes has circulated on social media, which appears to depict a large fire, though the exact location of the blaze is unclear. Syrian media also reported “fires in the forests” following the attacks.

Video from the Syrian side of the border where a Syrian Arab Army position was attacked by IDF attack helicopters tonight in response to a missile launch earlier today. #Israel#Syria#Golanpic.twitter.com/UBLVnLbfCF

“We hold the Syrian regime responsible & will respond to any violation of Israeli sovereignty,” the IDF said in a tweet.

Earlier today, munitions were fired from Syria toward Israel. In response, our aircraft struck military targets in southern Syria belonging to the Syrian Armed Forces. We hold the Syrian regime responsible & will respond to any violation of Israeli sovereignty.

Earlier in the day, the Israeli military said that “explosions were heard adjacent to the security fence from the Syrian side of Israel’s northern border,” and that some “damage to a civilian building and an Israeli vehicle was likely caused by fragments.” Insisting Damascus was “responsible for today’s shooting” while claiming sovereignty over the occupied Golan Heights, the IDF vowed to “respond vigorously” to any attacks against Israel.