Fresh from airing his family’s dirty laundry on Twitter, rap enigma Kanye West has once again breathed life into his will-he-won’t-he presidential bid, claiming that he could beat Joe Biden on write-in votes alone. 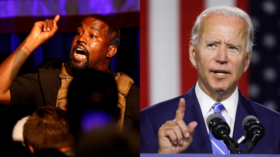 Days after announcing a new album and revealing that he’s been trying to divorce wife Kim Kardashian for two years, Kanye West again turned his attention to his 2020 presidential campaign on Saturday, in an all-caps announcement declaring “I CAN BEAT BIDEN OFF OF WRITE INS.”

I CAN BEAT BIDEN OFF OF WRITE INS #2020VISION

If West is still serious about running for the presidency, write-in votes may be his only path to victory, or indeed any kind of showing. The rapper announced his candidacy on July 4, past the deadline to file as a candidate in at least six states. Nevertheless, West pressed ahead and filed the proper papers with the Federal Election Commission (FEC), and managed to get his name on ballots in Oklahoma.

Since then he’s held one campaign rally, during which he addressed a crowd clad in a bulletproof vest, delivering his speech without a microphone or podium. West came out against abortion, weeping as he delivered a pro-Christian message he said would make the media “tell you that I’m crazy.”

That much was true, and West’s rally was described across news sites and gossip mags as a publicity stunt, evidence of mental illness, or both.

However, a recent poll put West at two percent nationwide, neck and neck with the Libertarian Party’s Jo Jorgensen and a point ahead of the Green Party’s Howie Hawkins. While it is extremely unlikely that he could surpass Joe Biden’s reputed 48 percent, he could in theory siphon enough votes from Biden to see President Donald Trump clinch a second term – something pundits on both sides suspect may be his plan.