UK Health Secretary Matt Hancock says that a second wave of the deadly Covid-19 virus is rolling across Europe and must be stopped from reaching British shores. 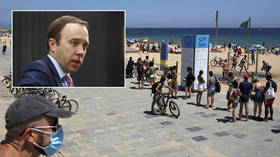 Hancock gave the alarming assessment during an interview with the BBC on Thursday. It comes as a number of European countries such as Germany and France have seen flare-ups in Covid-19 infections – and in the case of Spain, a huge rise in numbers, according to data from the European Centre for Disease Prevention and Control.

Hancock insisted that the UK needs to do everything possible to protect people from a second wave “reaching our shores.”

We can see sadly a second wave of coronavirus that is starting to roll across Europe.

The stark warning comes as the UK chief medical officers announced changes to self-isolation rules. People who test positive for coronavirus or show symptoms must now self-isolate for a minimum of 10 days, rather than seven.

The change comes after new evidence has emerged that shows those who are “mildly ill and are recovering have a low but real possibility of infectiousness between 7 and 9 days after illness onset,” UK health officials said. The new advice is in line with guidance issued by the World Health Organization (WHO).

In response to the increase in Covid-19 cases sweeping Europe, the UK introduced 14-day quarantine rules for people travelling from Spain. The move provoked an angry response from Spanish Prime Minister Pedro Sanchez who insisted they only had issues in a small number of regions, accusing London of making an “error” that was “not justified.”