The US’ top trade official has forcefully denied an allegation by ex-national security adviser John Bolton that President Donald Trump went to his Chinese counterpart for help with the 2020 election, insisting it “never happened.” 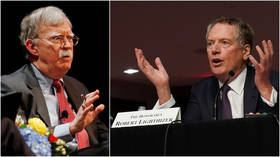 Excerpts published from Bolton’s forthcoming book on Wednesday claim that, during a sideline meeting at last year’s G20 summit in Japan, President Donald Trump asked Chinese leader Xi Jinping to boost his country’s purchases of US agricultural goods, believing it would aid his re-election bid. Pressed about the claim at a Senate hearing later on Wednesday, Trump’s top trade envoy, Robert Lighthizer, said in no uncertain terms that the allegation is false.

“There was a meeting on the outskirts of the G20 in Osaka between the president and President Xi, and I was in that meeting,” Lighthizer told lawmakers, adding that Bolton’s account is “absolutely untrue. Never happened.”

I don’t want you to think I’m being deceptive. I said what meeting I was at, and this never happened at it. For sure.

The previews of Bolton’s memoir come just a day after the Department of Justice launched a lawsuit seeking to force the former adviser to complete a pre-print review for the book, arguing it is “rife” with classified material. The book had reportedly been shipped out to warehouses, ready to hit the shelves, but the new suit could see its publication delayed, possibly prompting the leaked excerpts in retaliation.

Though Bolton has defended lying in service of US foreign policy goals on record, even openly boasting of his own ability to “spin” the facts, a number of American journalists and pundits rushed to endorse his version of the G20 meeting, one observing that he “kept very good notes.”

Why do I believe Bolton and not Lighthizer? Well, maybe b/c the former has a decades-long rep as a straight shooter, and also b/c everything Bolton says tracks so much other evidence re: how Trump operates.

Bolton’s book, originally set to be published next week, contains a slew of other allegations against the president, claiming the administration engaged in “obstruction of justice as a way of life” and that Trump “in effect, [gave]personal favors to dictators he liked.” Beyond excerpts selectively leaked to major media outlets, however, little evidence has been produced to back up the accusations.

Bolton ended his stint as national security adviser in September 2019 after falling out with Trump, who publicly declared on Twitter that his “services” were “no longer needed” due to ongoing disagreements over policy. The simmering feud has only escalated since, culminating in Bolton’s upcoming memoir, billed as a damning tell-all account of his time in the Trump administration.