Kremlin spokesperson Dmitry Peskov has rejected accusations that Moscow, in league with Beijing, is trying to profit from the ongoing deadly Covid-19 pandemic and undermine foreign nations. 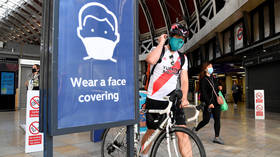 “Obviously, we categorically disagree with such statements,” Peskov told reporters.

Sky News also alleged that Moscow is running an “online deception operation” to sow tensions between EU member states and in the US amid the pandemic.

Beijing was accused by a number of politicians, including US Secretary of State Mike Pompeo, of “releasing” the coronavirus from a lab in the Chinese city of Wuhan, where Covid-19 was first recorded.

China has been also slammed for allegedly misleading the world about the true scale of the infection during the early stages of the outbreak. The country has repeatedly denied these claims.

Meanwhile, Western governments themselves have often been heavily criticized by opposition and the media over the way they handled the outbreaks in their countries.