A courthouse was torched and a police station vandalized during a large protest in Oakland, California. The violence comes as several other cities across the US were hit by rioting
and chaotic demonstrations. 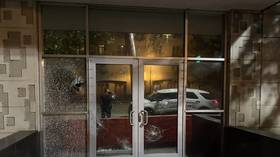 Oakland Police said that “agitators” had started a blaze inside the Alameda County Superior Courthouse on Saturday night. A video shows a fire raging inside the building.

Antifa has set a fire in the Alameda County courthouse in Oakland, CA. pic.twitter.com/MNWrpHgJ2u

Earlier in the evening, protesters attacked a police station, with reports saying they broke windows and painted graffiti on the building. Others shot fireworks and pointed lasers at officers and helicopters monitoring the situation. Oakland police later shared photographs of the aftermath.

Some within the crowd of 100s of demonstrators vandalized the police station. Breaking windows, spray painting, shooting fireworks and pointing lasers at officers and helicopters. We ask for organizers to keep the protest peaceful. #WallofMomspic.twitter.com/SGU6Y7PULg

Fireworks and dangerous projectiles are some of the items agitators used to assault officers. We ask the organizers of tonight’s demonstration to work with us, calling for peace and help us provide safe spaces and safe places for demonstrators. pic.twitter.com/ImpQdquirU

The violence came as hundreds of protesters marched through the streets of downtown Oakland, apparently in ‘solidarity’ with Portland demonstrators engaged in nightly clashes with federal officers. Footage shows a large column of protesters filling the city’s streets, with the front row of demonstrators carrying shields.

Despite numerous reports of violence and vandalism, no arrests have been made, local media reported. For weeks, Black Lives Matter activists have held regular protests across the US, with some of the demonstrations descending into riots.