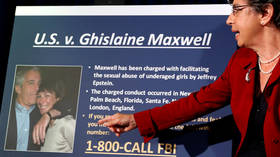 The sex-trafficking case against Maxwell, which covers the years 1994 to 1997, is a “prequel” to the sex-trafficking charges brought against Epstein last year, acting US Attorney for the Southern District of New York (SDNY) Audrey Strauss explained during a press conference on Thursday. It came just hours after the British socialite was arrested in Bedford, New Hampshire.

In addition to four counts related to transporting minors to engage in illegal sexual activity – including two counts of conspiracy – Maxwell faces two counts of perjury stemming from her 2016 testimony before SDNY, the indictment against her reveals.

In one case, she denied knowledge of Epstein’s “scheme to recruit underage girls for sexual massages,” retorting “I don’t know what you’re talking about.” In the other, she insisted she did not recall “the presence of sex toys or devices used in sexual activities” in Epstein’s home and denied any knowledge that Epstein was “having sexual activities with anyone when [she]was with him other than [her]self.”

Strauss described in detail how Maxwell “played a critical role in helping Epstein to identify, befriend and groom minor victims for abuse,” pretending to take an interest in the girls’ lives, taking them shopping and to the movies, and convincing them to let Epstein pay for their schooling and travel, thus placing them in his debt.

“Maxwell then tried to normalize sexual abuse” by discussing sexual topics, undressing in front of the girls, even being physically present while the girls gave Epstein massages, the prosecutor explained, thereby putting the victims at ease and leaving them “susceptible to sexual abuse.”

As for her false testimony, “Maxwell lied because the truth as alleged was almost unspeakable,” Strauss stated. “Maxwell enticed minor girls, got them to trust her, then delivered them into the trap that she and Epstein had set for them.”

Because of the “sweetheart” plea deal Epstein made back in 2007, his co-conspirators – including Maxwell – have been legally protected from prosecution over that set of charges. While Epstein accuser Courtney Wild challenged the plea deal in court, arguing it violated the Crime Victims’ Rights Act, which mandated the financier’s victims be informed of the non-prosecution agreement before it was finalized, that case was dismissed in April.

The disgraced playboy was arrested again last July on sex-trafficking and conspiracy charges arising from incidents that took place between 2002 and 2005, however, and finally faced upwards of 45 years in jail, only to die mysteriously in his cell just a month later.

With Epstein dead, the fate of his associates was up in the air, though Maxwell’s arrest appears to send a message to the other powerful figures whose names appear in court documents.

Prosecutors “would welcome Prince Andrew coming in and talking with us,” Strauss hinted, after a reporter asked about the British royal, named by Epstein accuser Virginia Roberts Giuffre as one of the men Epstein had ordered her to have sex with. “Our doors remain open, and we would welcome him coming in.”

Strauss took up her post only last week, replacing Geoffrey Berman, who resigned after clashing with US Attorney General Bill Barr.