A new US survey brought unexpected results as nearly 11 percent of young pollsters believe the Jews were responsible for the Holocaust, amid a wider trend of shocking ignorance about the Nazi genocide. 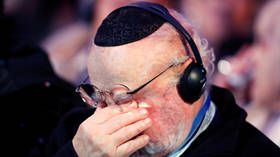 The 50-state survey on Holocaust knowledge among US Millennial and Gen Z was commissioned by the organization “Conference on Jewish Material Claims Against Germany.”

The survey consisted of roughly 1,000 nationwide interviews, with participants selected at random, and a further 200 interviews of young adults aged 18 to 39 in each state.

Some 63 percent of all respondents did not know that six million Jews were murdered, while 36 percent thought that “two million or fewer Jews” were killed.

“The results are both shocking and saddening and they underscore why we must act now while Holocaust survivors are still with us to voice their stories,” said Gideon Taylor, President of the organization behind the study.

The researchers developed a Holocaust “knowledge score” based on three criteria: whether a participant had heard about it, whether they could name at least one concentration or death camp and whether they knew that six million Jews were killed.

The results shocked the organizers, as, for example, roughly 19 percent of New Yorkers surveyed felt the Jews caused the Holocaust; followed by 16 percent in Louisiana, Tennessee, and Montana and 15 percent in Arizona, Connecticut, Georgia, Nevada and New Mexico.

Some 59 percent of respondents believe something similar could happen again.

Reaction to the survey online was one of dismay, and many laid the blame on the American education system.

Guarantee they’re all far left and hate Israel too. https://t.co/z9HzGo38Yk

I once gave a tour of the museum to a group from the Midwest. At the end they asked me how much of this was true. When I told them all of it, they were shocked. They said they never learned this in school. That is why we have places like this.