US Attorney General Bill Barr said that “violent anarchists” have transformed peaceful anti-police-brutality protests into riots, singling out ongoing demonstrations in Portland as an outright “assault” on the government itself. 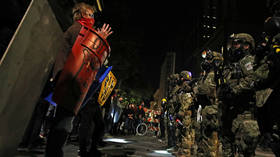 The comments came in Barr’s opening statement for an upcoming committee hearing this week, pre-released on Monday, in which the AG condemned those helping to stoke violence and unrest amid the protests.

“In the wake of George Floyd’s death, violent rioters and anarchists have hijacked legitimate protests to wreak senseless havoc and destruction on innocent victims,” Barr wrote, citing Portland as a “telling example,” where he said a “mob of hundreds of rioters” have “laid siege” to a federal courthouse every night for the past two months.

What unfolds nightly around the courthouse cannot reasonably be called a protest; it is, by any objective measure, an assault on the government of the United States.

The AG noted that protesters in the city show up each night “equipped for a fight, armed with powerful slingshots, tasers, sledgehammers, saws, knives, rifles, and explosive devices,” adding that they had recently thrown “commercial-grade fireworks” into the courthouse “in an apparent attempt to burn it down with federal personnel inside.”

While Barr said that African Americans still have legitimate concerns about institutionalized racism and an “understandable” distrust of police, he argued the ongoing unrest amounts to “brazen acts of lawlessness,” which could not be justified by concerns over police misconduct, no matter how severe.

The attorney general also took aim at the response to the protests from the media and some elected officials, saying many had “remarkably” blamed the federal government for the unrest, despite what he deemed an “organized assault” by activists.

The Trump administration has come under fire for its handling of the protests – namely its deployment of federal agents in Portland and elsewhere to defend historical monuments and other government property from vandals – with allegations that officers have unleashed excessive force and made questionable arrests without proper identification. Barr, however, insisted that “peaceful protesters do not throw explosives into federal courthouses,” arguing that rioting would not be tolerated.

At the very least, we should all be able to agree that there is no place in this country for armed mobs that seek to establish autonomous zones beyond government control, or tear down statues and monuments that law-abiding communities chose to erect, or to destroy the property and livelihoods of innocent business owners.