Dark, incisive, and anti-authoritarian, George Carlin was a rebel until death. Now the woke left have claimed him as their own, a figurehead in their anti-Trump crusade. But George’s legacy isn’t one of feelgood social justice. 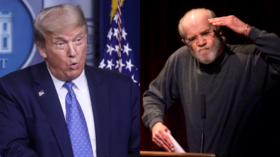 “They call it the American dream, because you have to be asleep to believe it,” Carlin sneered in a famous 2005 monologue. In a devastating broadside against politicians, the media, corporate interests, and the “dumb ass motherf**kers” who remain ignorant to the “big red white and blue d**k jammed up their a**holes everyday,” Carlin takes no prisoners, and the crowd delights in his shredding of the status quo.

Now, a group of activists based in Portland have repackaged the famous monologue, putting it alongside video clips of President Donald Trump’s America: race riots, coronavirus deaths, and of course, Trump shaking hands with Vladimir Putin. “#AmericaWakeUp,” reads a caption at the end of the clip.

Released on Sunday, the video was cheered by the anti-Trump brigade. “This video is completely devastating for Trump,” one activist wrote. “George Carlin gives him the finger from the grave.” More commenters shared the video, encouraging their followers to vote Democrat in November.

this tweet is so so wrong. George Carlin was talking about BOTH parties, Repub and Dem, being the Club, and we the people aren’t in it. Making it about Trump and only Trump is Historical Revisionism of the highest order. #americawakeup

However, Carlin’s hatred for politicians and the elite was not just limited to the Republican Party. Throughout his career, Carlin ripped on the “criminal” administration of Ronald Reagan, both Bushes’ fondness for “bombing brown people,” and Bill Clinton, who he said “might be full of shit, but at least he lets you know it.”

The “big club” Carlin talked about in the latest video included Democrat and Republican lawmakers, and Carlin didn’t shy away from skewering both.

Furthermore, Carlin’s best and most loved routines were written and performed when the right held more cultural sway in the US. From Nancy Reagan’s moralizing to the media-enforced patriotism of the post-9/11 years, Carlin could count on the right as a reliable target. Times have changed though, and the left holds far more power now than it did two decades ago. Conservatives are regularly ‘deplatformed’ on college campuses, politically incorrect speech can jeopardize one’s career, and the consensus enforced by the mainstream media is overwhelmingly a liberal one, no matter how many clips of Fox News’ Tucker Carlson the Portland activists can splice into their video.

“The habits of liberals, their automatic language, their knee-jerk responses to certain issues, deserved the epithets the right wing stuck them with,” he wrote. “Here they were, banding together in packs, so I could predict what they were going to say about some event or conflict and it wasn’t even out of their mouths yet… Liberal orthodoxy was as repugnant to me as conservative orthodoxy.”

Carlin is unfortunately not alive to offer his opinion on the times we live in. However, it’s not difficult to imagine him scoffing at the media’s non-stop ‘Russiagate’ hysteria, just as he scoffed at the media’s coverage of the Gulf War in the 1990s, accusing the press of working as an “unofficial public relations agency for the United States government.” It’s also easy to picture him tuning out of the ‘Orange Man Bad’ liberal consensus on Trump, even if he would probably savage his policies and personality.

That’s assuming he would even have a stage in the first place. After all, Carlin delighted in provoking the would-be speech police, with his 1970s ‘7 Dirty Words’ routine aimed explicitly at angering the censors. An updated version of this routine could well see him canceled by the woke torchbearers of the social justice movement.