Federal officers in Portland are forbidden by court order from targeting journalists filming the riots. For ‘Antifa’ rioters, the order opened up an opportunity: anyone with a camera can call themselves a “journalist.” 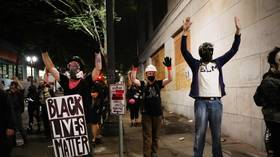 Riots have raged in downtown Portland for 60 straight nights, and the threat of arrest by federal agents hasn’t stopped crowds of rioters from laying siege to the city’s Justice Center night after night. With Mayor Ted Wheeler reluctant to order a police crackdown on the violence, federal officers have filled the gap. Unlike their local counterparts, these officers have had no qualms about making arrests, swinging batons, and firing tear gas and rubber bullets at the rioters.

However, a federal judge last week issued a temporary restraining order on the agents, ruling that they may not arrest, disperse or otherwise use force against reporters and legal observers covering the protests.

The order, it seems, has given the rioters an opportunity. Elijah Schaffer, a right-wing journalist reporting from Portland, described how rioters will identify themselves as “press,” using the tag as cover to insult and taunt officers. Anyone with a “$40 handicam mounted on a gas station tripod,” can call themselves a journalist, he said.

This fake Antifa press problem is a pandemic This man defies orders, insults officers, and makes sexual references to them And claims he’s press with a $40 handicam mounted on a gas station tripodDue to a court order police can’t do anythingThis puts real press in danger pic.twitter.com/cVvenAof0S

During Sunday night’s riots, Schaffer documented how a crowd of these “fake Antifa press” pushed back against a line of officers, who then fired rubber bullets and flashbangs at the “real press.”

Damn the fake press! I think there are more fake Antifa press than there are real press here A mob of them scream about having the right to rush officers due to press immunity move towards the Feds aggressively then they fire rubber bullets & flash bangs at the real press pic.twitter.com/0OsUA82K4X

In one video, a woman claiming to be covering the protests rages at the feds for “waving [their guns]at anybody with a press pass,” before admitting that she is not in fact a reporter.

FAKE PRESS 🚨 This rioter gets pissed when Feds aim their sights down on her after she provokes them. She claimed to be press. @ElijahSchaffer has posted the moments leading up to me pressing her. pic.twitter.com/AayCHnQ7c8

Mainstream media has not reported on these tactics. Instead, the rioters have been portrayed in glowing terms, and federal agents have been vilified for their supposed crackdown on the media.

Some of the reporters targeted have made little effort to separate themselves from the rioters. ‘Defend PDX,’ a self-described collective of “journalists coming together to document community based activism,” openly identify themselves as allied with the mob. On the group’s Twitter feed, its ‘reporters’ describe standing on the “front line” with rioters, scaling the security fence erected around the Justice Center and facing off with the feds.

The first taste is always the best pic.twitter.com/cl5nIMFEax

“The sound of the sacred fence rattling is music to my ears,” one Defend PDX reporter tweeted on Sunday night, before describing how the feds “barely pushed us out of the park” and warning fellow rioters to “beware of false retreats.” Throughout the night’s coverage, the line between observer and participant is always blurred, and often outright broken.

Antifa Rioters are posing as press in Portland riotsPress do not engage in political activity during protests or riots, unless undercoverThis is putting open reporters at risk to being caught in the cross fire Antifa is deteriorating our constitutional system from within

The ‘real’ press have barely been more neutral. Aside from the positive portrayal of the rioters in the Washington Post and New York Times, cable news has consistently downplayed two months of nightly violence in the Oregonian city. MSNBC’s Joe Scarborough referred to the protests last Thursday as “peaceful protests, for the most part,” and decried the “deeply disturbing attacks” by federal agents.

Hours before Scarborough spoke, rioters set the city’s federal courthouse on fire. Two nights later, a black Trump supporter was followed and stabbed by an “Antifa dude” while walking downtown. Police who showed up to assist the victim were harassed and had their vehicles attacked by rioters.