Goalkeeper Grace Moloney on representing Ireland, her exceptional season at Reading and how she used lockdown to improve.

Born and raised in Slough, near Reading, Moloney grew up dreaming of wearing the green jersey on the big stage.

The goalkeeper hails from a big Irish family, her grandfather originally from Tipperary and her grandmother from Cavan. Her father, Bill, was always football-mad and Ireland-mad, constantly decking her out in Irish kits.

From 15, she climbed the underage ranks on these shores, fulfilling that childhood dream. Number one for the golden generation of players that excelled at the U17 World Cup in 2010, Moloney’s international rise was more of a a slow burn at senior level, but her first competitive start against Germany before Christmas was one to remember.

“It was probably the best day of my life,” the Reading star, who’s been in exceptional form in the Women’s Super League [WSL] this season smiles.

It was a long time coming, but worth it.

The emotion shown before, and after a confident and assured display against one of the best teams in the world, said it all. Asked by The42 to put what representing Ireland means to her in words, she struggles.

“Honestly, I tell ya… honestly, the national anthem was playing, and I was bawling and crying. My Mum said she could see me crying. It means the absolute world.

“I say it to all the girls all of the time, apart from an accent, it is the absolute world to me. You’re saying put it into words but I actually can’t. I can’t put it into words, it just means absolutely everything to me and to my family.”

to the chubby little girl that just wanted to wear her Ireland kit everywhere, to last night, it was absolutely everything 💚☘️ pic.twitter.com/SqTn5nWI4h

That alone is motivation to drive on, and nail down her status as Ireland’s first-choice ‘keeper,.

“It’s hard because I want to play each week for Reading and be the best that I can, but my goal is to be number one here,” she nods.

“It has been since I was little. When Emma Byrne was here, I wanted to be in every camp and, listen, I wanted to take her spot. Whether that was a dream that was way too big for me but growing up…”

Her mind wanders back, and she tells a brilliant story.

“I remember we were at the airport going to the U17 World Cup and Emma gave me a pair of her gloves. Honestly, I remember my Dad picking me up at the airport and saying to him, ‘Oh my God, you’ll never believe what Emma Byrne just gave me.’

Now, she’s that role model for others, especially off the back of her outstanding recent exploits for club and for country.

The 27-year-old has undoubtedly been one of the top goalkeepers in the WSL this season, her top displays of shot-stopping and distribution earning her countless spots in the English top-flight’s Team of the Week.

Having been at Reading since the age of nine, and first-choice over the past few years, she’s come in for high praise of late, and was rewarded with a contract extension in February.

“I feel this has been my best season to date,” she agrees. “Lockdown was massive for me, changing my mentality and how I looked at my game. I understood what type of goalkeeper that I am and what I can bring to the team.

“I’m just more confident. As goalkeepers, our mistakes are highlighted the most. It’s about having the confidence to own the mistake, saying, ‘Girls, that’s on me, my fault,” and trying to get it out of your system as quickly as you can because it’s better for a defence to play in front of a goalkeeper who is really confident.” 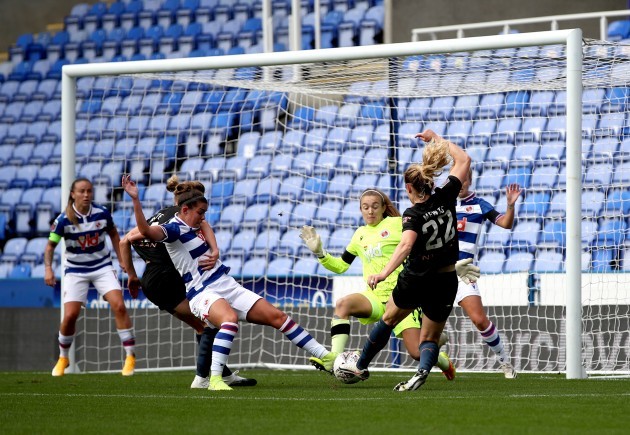 Moloney making a save for Reading.

While others were left downtrodden by the pandemic and lockdown, Moloney used it to her advantage, working on herself physically and mentally.

New Zealand number one, Erin Nayler, signed for the Royals from Bordeaux in August, and that also pushed her to step up her game.

“My mentality was, ‘You’re not taking my spot,’” Moloney, who was nowhere near first-choice in the Irish set-up at the time, recalls.

“Everyone on the outside probably thought ‘Wow, Grace isn’t going to play,’ but I worked hard and tried to keep her out.”

That hard work certainly paid dividends, with motivation also sourced from her long-time manager Kelly Chambers, and superstar team-mates Fara Williams and Jess Fishlock, and the standards they demand in terms of analysis, gym and diet.

The fact that Reading haven’t had their best season to date also means Moloney has to perform for the team, her consistent displays more notable with the side under pressure.

“To be brutally honest, we as a team haven’t performed as we should be,” she explains. “That reflects on me having to do more. It’s nice to be in Team of the Week but it’s not something I focus on because I always try to think towards the next game.

“If I’m in Team of the Week, I never expect to start in the next game. I always go into the meeting where the manager announces the team thinking, ‘Am I going to play, not going to play?’ That’s my mentality, train as hard as I can and hope I play at the weekend.”

That’s the exact same when it comes to playing with Ireland. Football is fickle, and the fact that she started against Germany last time out means nothing ahead of tonight’s friendly against Denmark at Tallaght Stadium [KO 6.30pm, RTÉ Player], or Sunday’s against Belgium.

Anyone can be dropped at any point, so it’s all about “giving it wellingtons” in training and taking your chance on the pitch when it comes.

There’s plenty of choice among the GK Union, between Moloney, Marie Hourihan of SC Braga in Portugal and West Ham’s Courtney Brosnan. All three played in the last campaign, while Peamount United’s Niamh Reid-Burke also easily could have. She recently announced her international retirement, with DLR Waves star Eve Badana linking up with the squad to train this week.

They’re all supportive of one another, backing each other in training and beyond in this, the most competitive goalkeeping mix in quite some time. 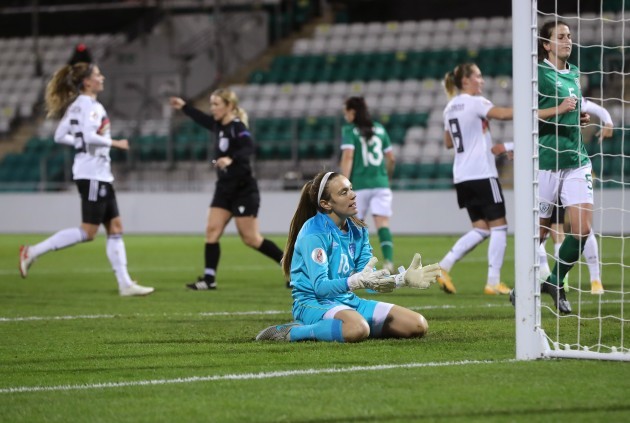 “If someone is picked to start, we’ll always be fully supportive and try to help them before games if they want more kicking or crossing,” Moloney says. “We just want to qualify and whoever is deemed the best goalkeeper and performing at the time will be fully supported.”

That’s the main thing, but of course, they all want to start; Moloney, for one, certainly eager to bounce back from “probably my worst game of the season” — a 5-0 home defeat to West Ham at the weekend.

The journey towards World Cup qualification starts today, these friendlies getting Ireland up and running ahead of the draw on 30 April and qualifiers in September.

Obviously, the end goal is to reach the finals in New Zealand and Australia, and to qualify for a first-ever major tournament. Just how much would that mean?

“It means everything for everyone,” Moloney concludes. “I played at the U17 World Cup, myself and the girls still talk about the experience from that. Even going to a country like Trinidad and Tobago, somewhere you wouldn’t usually go to.

“The group of girls we had there came together so much and wanted to win for each other. It was absolutely brilliant.

“The group of players we’ve got now is probably the strongest group that I’ve been in going into a campaign. I think there is real quality within the group and I genuinely believe we can get there, regardless of who is in our group. This group is really together and we’ll push each other over the line.”