Shortly after Mayor Lori Lightfoot conceded to allow the federal government to deploy their agents to Chicago, the city has removed the bronze Columbus statue which has been vandalized amid massive Black Lives Matter rallies. 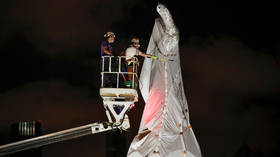 The removal operation started at Chicago’s Grant Park in the middle of the night on Friday. Workers used two heavy-duty cranes to attach metal ropes to the Christopher Columbus monument, which was wrapped tight in white tarpaulin.

The statue of the Italian explorer, erected in the 1930s with funding and blessing from Chicago’s Italian-American community, was then brought down in front of onlookers watching and cheering from across the street.

Reports of city authorities ordering the removal have been making rounds in the media in recent days. Local newspapers suggested Mayor Lori Lightfoot could have taken the decision earlier on Thursday, on the day a large crowd of protesters amassed around her house, demanding that she defund the police.

Lightfoot, who had sparred with President Donald Trump over sending federal agents to her city, generated local headlines this week when she suddenly changed her mind, having reluctantly agreed to the deployment.

The agents, drawn from the Justice Department – which includes the FBI, the Drug Enforcement Agency, and the Bureau of Alcohol, Tobacco, Firearms and Explosives – are said to be cooperating with local law enforcers tackling crime and gun violence in Chicago.

Grant Park itself has seen fierce clashes between police and protesting crowds, who showered officers guarding the sculpture with projectiles and fireworks last week.
Some protesters have also tried to take Columbus down on their own, but police reinforcements stopped the toppling in a last-ditch move.