Armed police evacuated people from the area near St. Thomas Hospital in London while Westminster Bridge was closed during a security operation Tuesday. Police later stood down the alert and removed cordons. 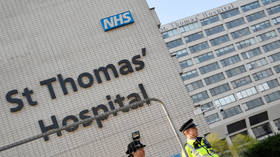 There was no immediate confirmation of the nature of the incident from either the police or the hospital administration but police confirmed via Twitter shortly after the alarm was raised that they were standing down.

Local media reported that doctors, nurses and patients at the hospital were placed on a security lockdown, with people were prevented from entering the building by armed police while the operation was still underway.

I’m at St Thomas’ Hospital, where there’s some kind of serious incident under way. I can see armed police and there’s a helicopter overhead. pic.twitter.com/lx20emoDru

A number of police vehicles surrounded the hospital, as shown in CCTV footage from the scene. The hospital is located near Waterloo Station and the Houses of Parliament.