B&G Foods has retired the black ‘chef’ mascot who once graced its Cream of Wheat packaging, the latest character to get the chop as corporations realize they can score easy social-justice points by axing images of nonwhite people. 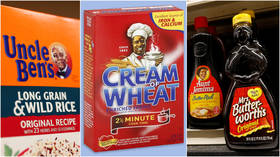 Announcing the packaging change in the kind of self-flagellating press release that has become familiar in recent weeks, B&G stated they were “initiating an immediate review of the Cream of Wheat brand packaging” because of “concerns regarding the Chef image.” The brand promised to “proactively take steps to ensure that we and our brands do not inadvertently contribute to systemic racism” and reminded consumers that they “unequivocally stand against prejudice and injustice of any kind.”

Cream of Wheat fans might wonder how the anonymous smiling chef perpetuates systemic racism, but they know better than to voice their doubts out loud. No one – from large corporations to the people who buy their products – wants to be seen as racially insensitive, and the range of behaviors that fall under that heading appears to be expanding rapidly.

There are plenty of good arguments for scrapping these brand icons. Aunt Jemima, of pancake syrup fame, was named after a minstrel song, and the character herself based on the offensive “mammy” racial stereotype; the original model for the character was born a slave in the South. Over the last 70 years, Quaker gradually lightened Jemima’s skin and made her thinner, finally ditching her “mammy” bandana entirely for the most recent 1989 reinvention. In short, she’s been “problematic” since day one, even before you get to the ingredients in the products marketed under her name (spoiler alert: Aunt Jemima syrup contains no actual maple syrup, but it does have a lot of high fructose corn syrup).

Even the Cream of Wheat chef, though reportedly based on a real-life black chef named Frank White, replaced a much more offensive mascot for the cereal, a dim-witted black stereotype named Rastus who spoke in broken English. Thus, while the average consumer doesn’t think of racism when buying Cream of Wheat, it’s there lurking in the brand’s history. Ask Mars, owner of Uncle Ben’s brand rice – they tried to reinvent Ben as a high-flying Madison Avenue executive in 2007, giving him a website where he dispensed “grains of wisdom,” but the past wouldn’t stay buried – or maybe the makeover was just too cringe to successfully pull the wool over black consumers’ eyes.

But make no mistake, this is about pulling the wool. Corporations have figured out that the surest way to escape being “canceled” amid the 2020 cultural revolution is to get on their knees and pander for all they’re worth, whether it’s by sacrificing a beloved brand character, yanking a classic film from circulation, or literally rewriting the dictionary definition of “racism.” Mrs Butterworth, ConAgra’s Aunt Jemima competitor who technically doesn’t even have a race, was tossed on the scrap-heap along with Jemima, Ben, and the Chef this week, on the mere suspicion she was black. Unlike her peers, Butterworth is represented only by a “distinctive motherly-shaped bottle” (seriously, that’s how maker Pinnacle Foods describes it) rather than an illustration. She also debuted in 1961, on the eve of the Civil Rights era – a time when many Americans were furtively trying to memory-hole their worst racist excesses – so it’s unlikely she was intended as a racist stereotype.

But by sacrificing Mrs Butterworth on the altar of woke capitalism, ConAgra ensures they won’t have to answer troublesome questions about why they’re pushing sugar-laden, obesity-promoting synthetic goo even as America tips the scales as the fattest country in the world. Just as Band-Aid owner Johnson & Johnson knows their virtue-signaling means they won’t get “canceled” for knowingly peddling toxic talcum powder for decades, and Starbucks knows it won’t have to deal with the repercussions of using child and slave labor on its coffee plantations. By climbing on board this superficially-woke bandwagon, Big Business is making a big statement about how equal it thinks we all are – equally gullible, that is.