From their breathtaking vantage point hundreds of miles above Earth astronauts can get a unique perspective on our planet. The outpost allowed astronaut Doug Hurley to notice a mysterious swirling pattern in the ocean below. 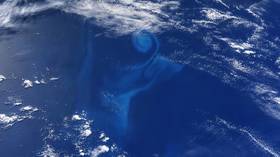 Hurley, who only arrived on the International Space Station (ISS) in recent weeks, snapped the photograph after spotting the peculiar phenomenon in the Pacific Ocean from a height of about 408 kilometers (253 miles).

He shared a spectacular photo on Twitter, showing the strange swirl in all its glory. “This light blue ocean swirl caught my eye as we flew over the South Pacific,” the astronaut explained.

The stunning image sparked a flood of theories as to what was responsible for the mysterious pattern, with bioluminescent algae and even sea-monsters among the popular guesses.

The fishing boat(bright spot) stirred up the bioluminescent algae in the area while its crew was dropping their nets(dark circles). The pattern is both from the boat’s wake perturbing the algae & the schools of fish circling away from the bow of the boat as it raced overhead. pic.twitter.com/tmkAJs5qXh

While those are intriguing answers, the correct cause of the swirl mystery appears to be an eddy, which is causing nutrients that are usually found in much deeper waters to churn up to the surface.

“The ocean is a huge body of water that is constantly in motion,” the National Ocean Service explains. “General patterns of ocean flow are called currents. Sometimes these currents can pinch off sections and create circular currents of water called an eddy.”